Cards and Cold Ones

My kickass wife has a great tradition going called 12 Days of Beermas where everyday leading up to my birthday/xmas eve, she gifts me with a nice craft beer. I think this is the 3rd year doing it. She gets a kick out of finding microbrews I would like (and don't worry, I pour her a taster of each). She's more of a beer snob than me. I definitely appreciate a lovingly crafted beer, but I'm not above slumming it with PBR. She also has an encyclopedic memory about her feelings on beers she's tried, whereas I'm nowhere as good at keeping track of that kind of stuff.

Since some other blogs like All Trade Bait All the Time and Bob Walk The Plank slip in a beer review post from time to time, I thought I'd try joining in. I've never been very good at critiquing food/drink, so my "reviews" will be brief. Today I'll be featuring the first 7 beers from Beermas so far this year. And I'm matching them up with a Christmas Card from my collection. Because why not? 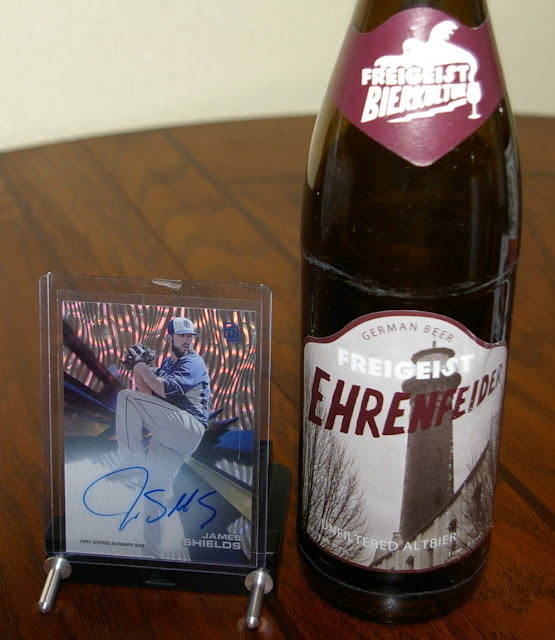 Here we've got my first James Shields autograph on a 2015 Topps High Tek Clouds Diffractor. Was glad to pick up a card featuring him as a Padre (seems to be a spring training uniform with the weird pit things). He's paired up here with a Freigeist Ehrenfeider. Germans make good beer. This one's an unfiltered altbier. It was pretty good; a little fruity. Just 4.8% ABV, so pretty light compared to the rest of these. 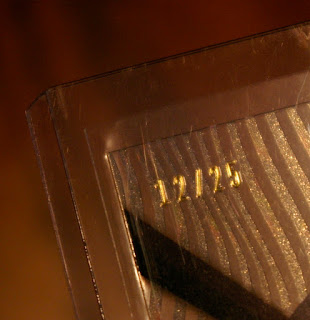 Here's a close-up on the Shields numbering. 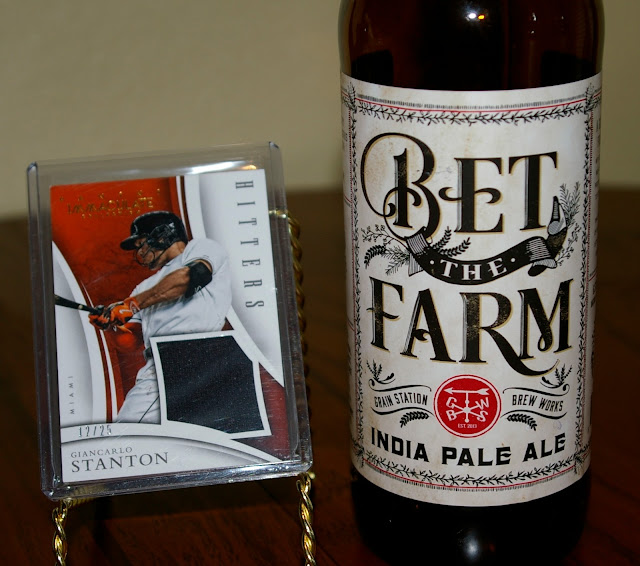 Next up we've got a Giancarlo Stanton jersey relic from Panini Immaculate. Bet The Farm is a crisp IPA. I wasn't clever enough to do it on purpose, but the Grain Station name of the brewery is kinda close to "Giancarlo Stanton". 6.5% 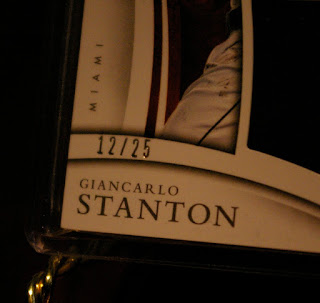 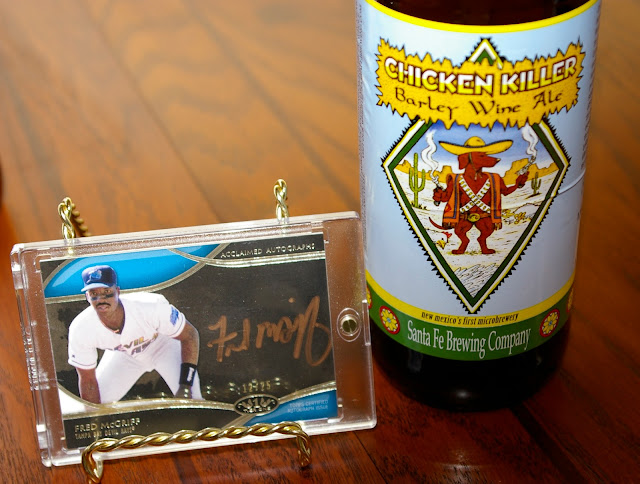 This one was an easy one to match up. The label has a cartoon dog on it, so of course Crime Dog is the clear choice. This Chicken Killer Barley Wine packs a punch. Very boozy at 10% 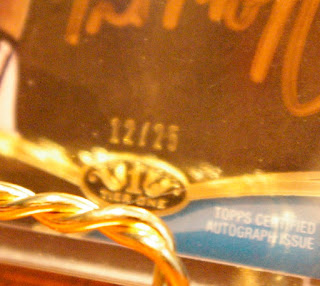 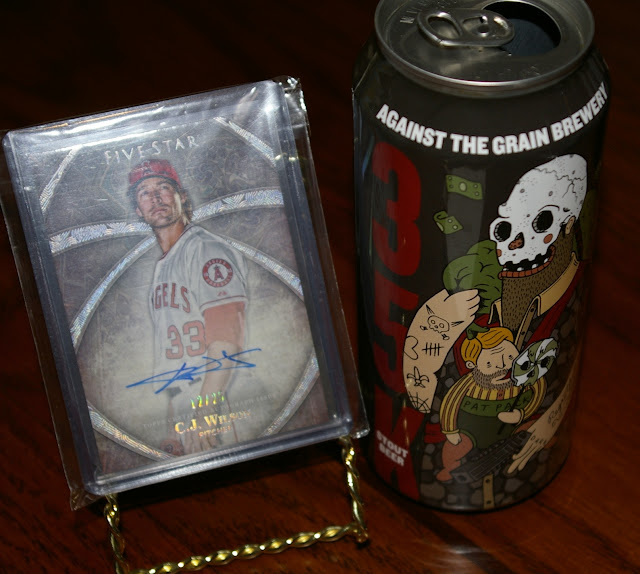 C.J. Wilson goes against the grain here with a can of 35K stout. This was a pretty good beer. 7% 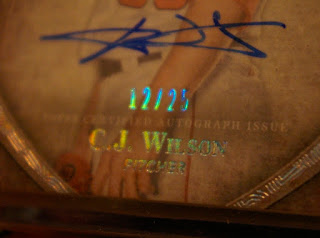 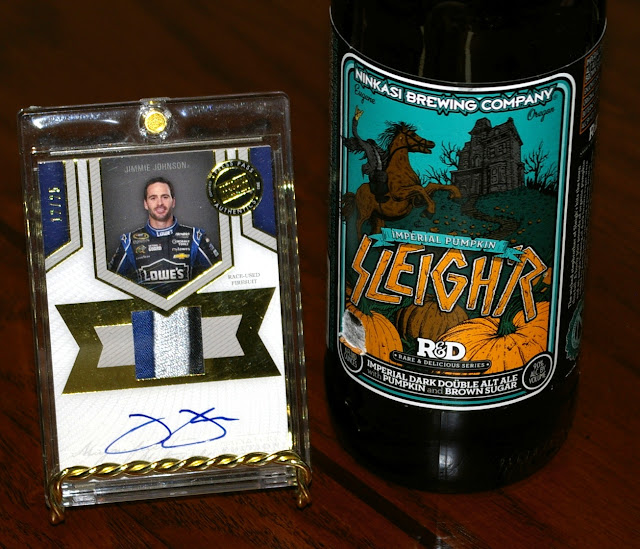 Jimmie Johnson sleighs his NASCAR competition, and this Ninkasi Imperial Pumpkin Sleigh'r will get your motor running. Maybe not quite as much sweetness as I like from my pumpkin ales, but imperials are all about jacking up the ABV. 9% 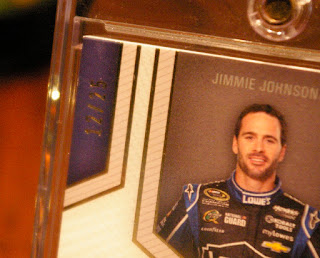 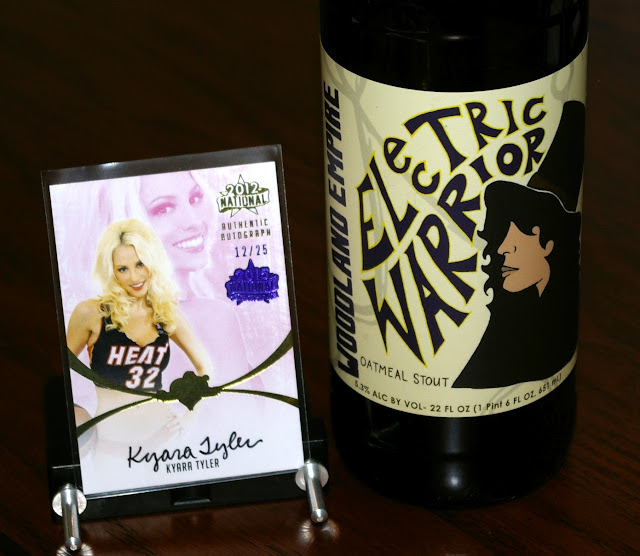 Rock guitarists get lots of girls, so this Electric Warrior oatmeal stout would naturally attract a girlie card. I'm not sure who Kyara Tyler is, but she's a cutie. Picked this card up on Listia recently. Smooth dark beer from Idaho. 5.3% 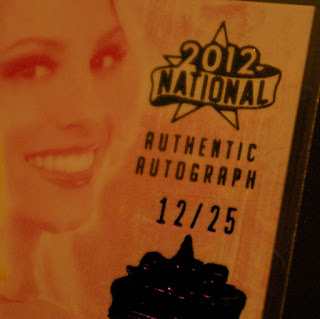 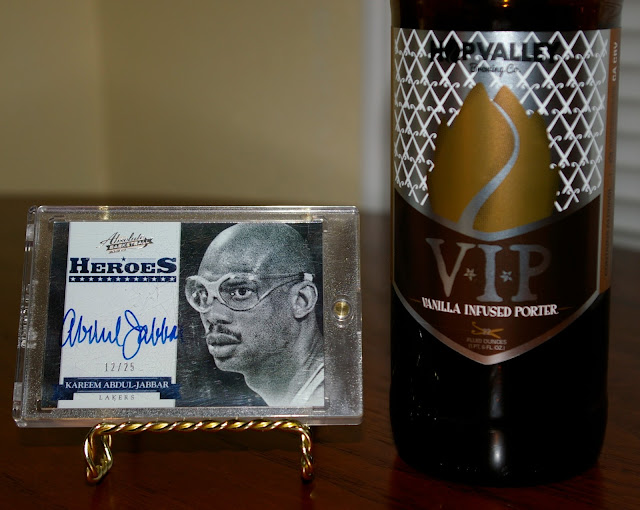 Let's finish off this post with VIP Kareem Abdul-Jabbar. Kareem probably won't be partaking of this Vanilla Infused Porter from Hop Valley Brewing Co. anytime soon due to religious beliefs, but that's ok. I was really excited about this one, though it couldn't quite live up to expectations. Not bad, not particularly good, just interesting. But hey, I'd drink it again! 5.9% 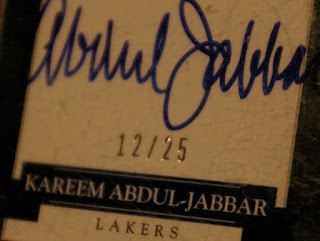 I'm looking forward to the next 5 beers and will likely do a follow up post with them later.

Happy Holidays, everybody!
Posted by defgav at 3:52 PM