Turning a good pull into a great haul

Back on Christmas Day 2016, I opened a gift box of 2015 Tier One and pulled a 1/1 auto of Alex Cobb. It was bittersweet because it's a thrill to pull a true 1/1, but an oft-injured pitcher on the Rays? Yeah, a bit of a disappointment compared to other possible names I could have pulled.

But then Cobb came back for a solid 2017 season, and just recently signed a big free agent contract with the Orioles. I figured while his name was in the news was a good time to throw my 1/1 on eBay and see if I got any interest, admittedly at a "reaching" price.

Turns out there's an Alex Cobb supercollector out there, and while he didn't jump at my big asking price, he sent me a message about the possibility of working out a deal. I let him know I'd be open to trading, as I'm definitely a collector first and foremost, not really much of a seller.

And it worked out great for all involved, as he got a nice 1/1 auto to add to his impressive Alex Cobb collection, and I got a sweet bunch of cards from him (even more than I was expecting) which I will now show off to you. 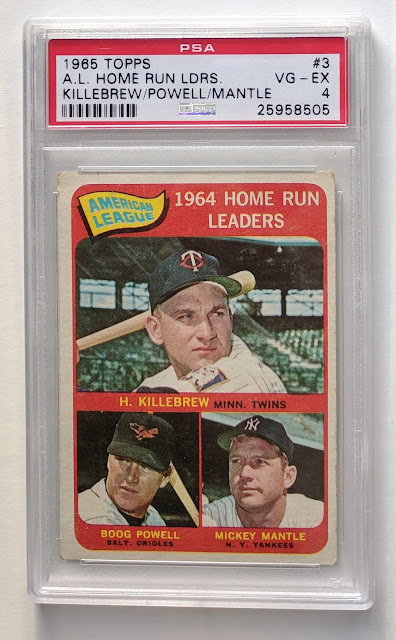 My first graded Mantle.. with Boog Powell and Harmon Killebrew along as well. Pretty cool! I already had this card in my '65 set, but this one will likely "upgrade" the old one, which will in turn get bumped to the Mickey PC. (I definitely love Killer, but it's hard to trump top The Mick). 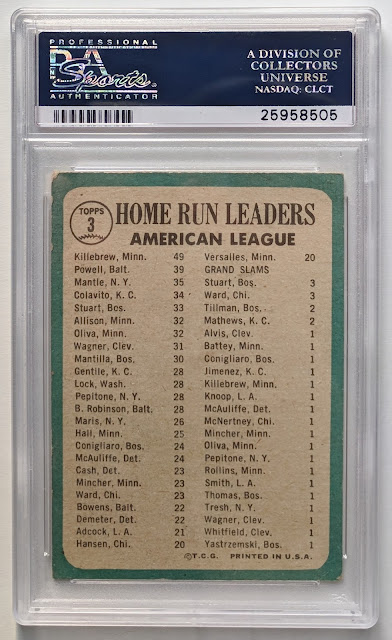 Minnesota had a lot of sluggers that year. 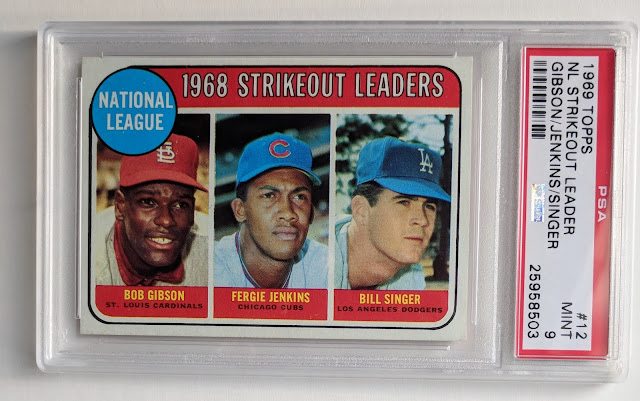 This is pretty incredible. Before this, I think my highest-graded vintage card was a PSA 6, but now I've got this pristine specimen slabbed a 9. I'm not even a big graded-cards guy, but that's pretty neat.. A "pack-fresh" card that's nearly 50 years old. I collect both HOFers on the card, but will likely give the nod to Bob Gibson for PC placement. 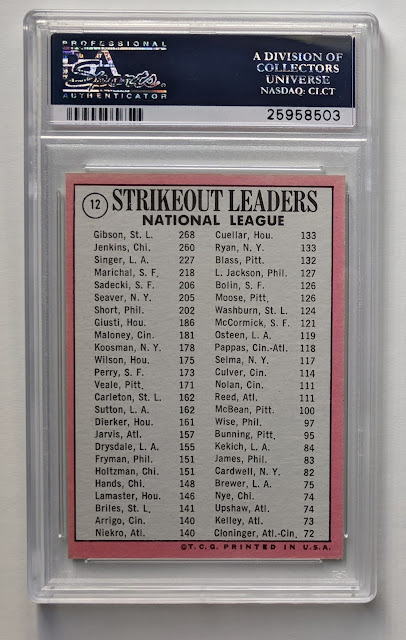 Perhaps the only thing stopping the card from being graded a perfect 10 is that the back is slightly off center. Several greats listed there. 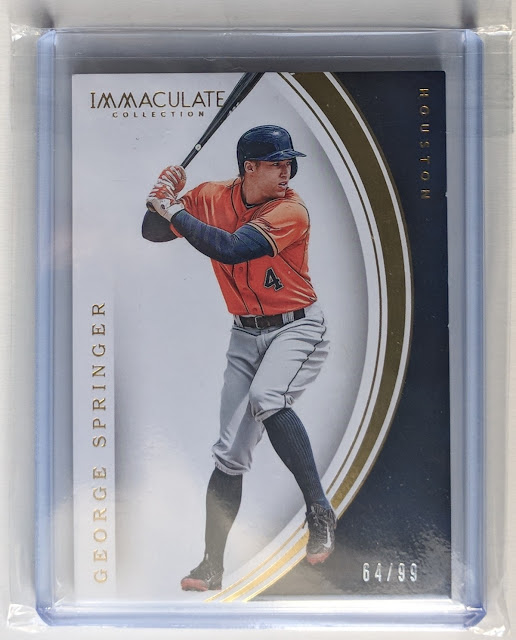 Getting into modern cards, here's a George Springer #'d /99. Looks like he's off to a hot start this season, continuing where he left off after his big World Series. ("According to the Elias Sports Bureau, it was the first leadoff home run for a defending World Series champion. Springer also is the only player ever to hit a leadoff home run on Opening Day in consecutive years." [source]) 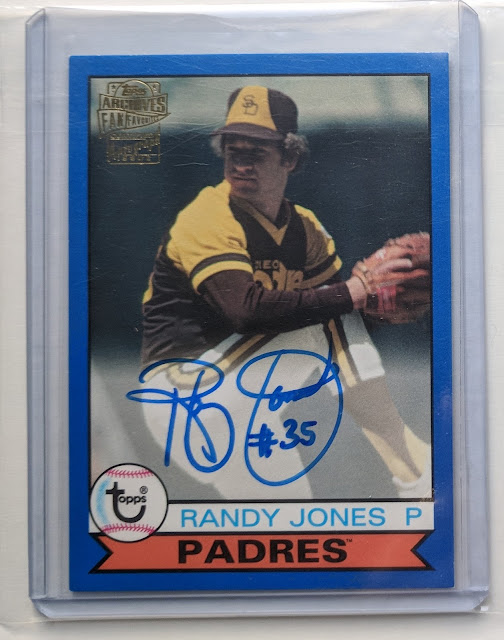 Love this Randy Jones blue parallel auto #'d /199. (Sorry most of these are still in the top loaders and team bags, but I was rushing to take these photos this morning before work.) 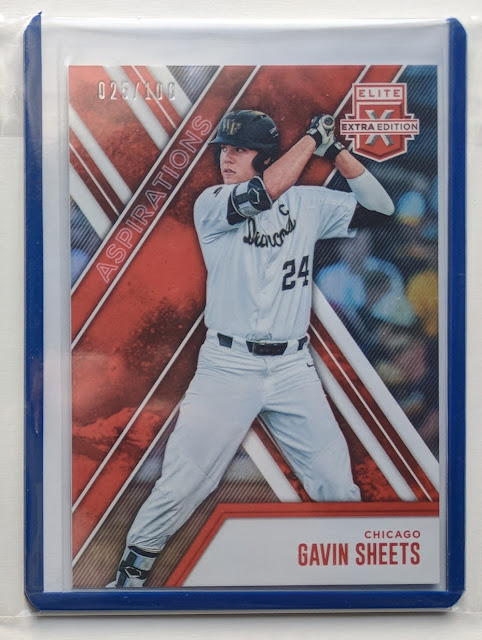 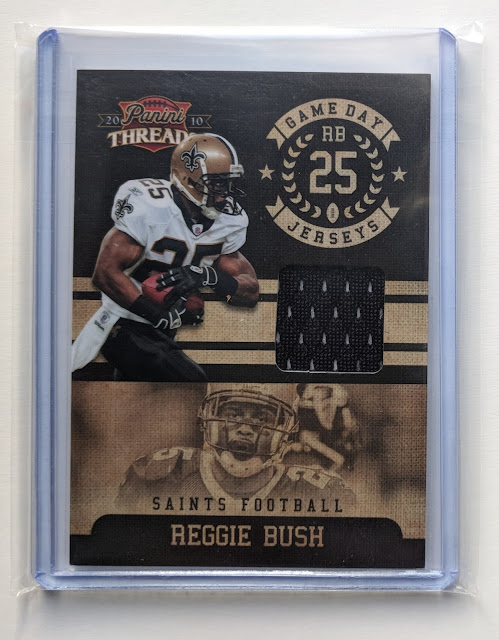 Sweet Reggie Bush jersey relic, #'d /299. A hometown hero of mine, I hadn't heard much about him lately so I did a wiki search; turns out he announced his retirement in December 2017. Never quite lived up to his hype out of college, but still put together a solid career and got himself a Super Bowl ring. 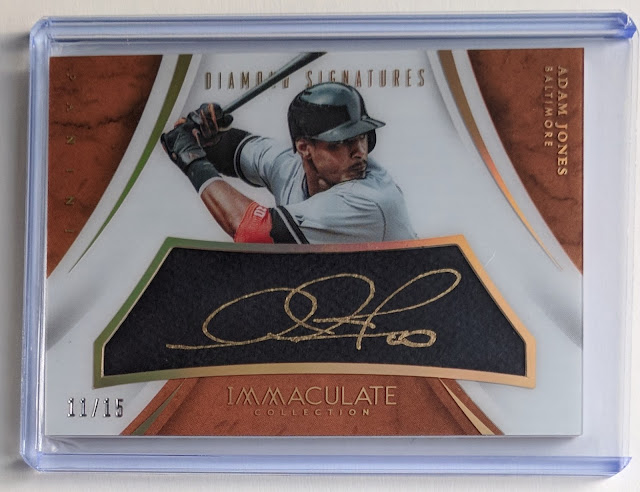 And last card of the post, a beautiful Adam Jones auto, #'d 11/15. The gold ink on a textured black surface looks awesome. While I'm not sure this counts as a true "on-card" signature, I can't complain about this card at all. Just need to throw a bird logo on the helmet and it'd be damn near perfect. He's a fun guy to collect. The San Diego native has put together a Hall of Very Good worthy career in Baltimore. (Update: Looks like he hit a walk-off tatter in their opener today. Nice.)

So there you go! Excellent haul for an Alex Cobb autograph I didn't have much use for!
Thanks again for the trade, Reid. (Anybody else sitting on an Alex Cobb 1/1? He's your guy.)

Thanks for reading and enjoy the start of the baseball season, everybody! I get tomorrow off (Good Friday), so I'm looking forward to a long weekend of baseball.
Posted by defgav at 3:30 PM