I photoshop up my share of "fake cards" here on the blog, but I also whip up a real physical card from time to time. Here's a recap of the few sketch cards I've made in 2014. These are all "1/1" of course but what really sets them apart (and helps make up for my lacking artistic ability) is the fact they all glow in the dark(!!). And I think they all look better in-hand, with sparkly action that doesn't come through in the photos. All of these have been lovingly sent away to trader buddies of mine, but I took pictures of them before sending them off. These gifs are otherwise undoctored images put together to give you, the reader, a feel for the cards.

I made this as a surprise for Tony L. at Off-Hiatus. The source picture was from Robin's 3000th hit celebration, I believe. No one's going to confuse this for a real artist's work, and looks a little more like Don Mattingly or Jeff Foxworthy than Robin Yount, but not bad for a first attempt at a glowing sketch card. 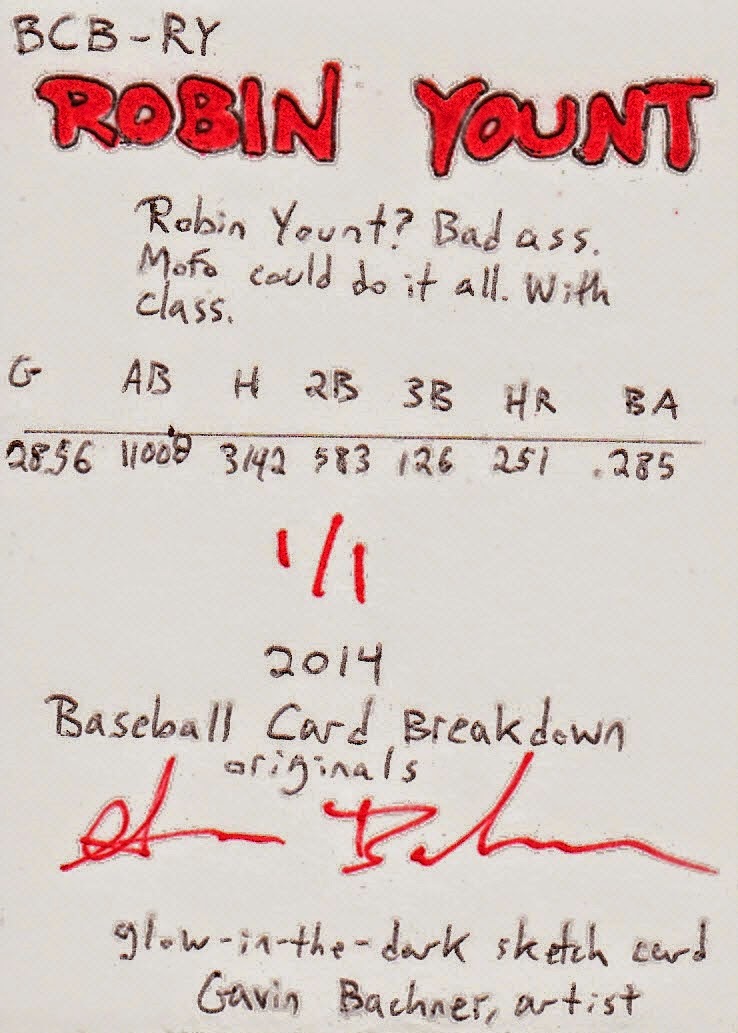 This Big Hirok was a surprise for Zippy at Dishin' Out Yankees. I think it came out the best of this year's set, actually. Not perfect, but pretty decent. This one glows on the back, too.

A surprise for Greg Z., this one came out pretty good.. but then again, it's a drawing of a drawing, not a real person, so it's almost cheating. Greg has quite a collection of real, officially licensed Archer sketch cards, but I thought this would be a neat addition for him. 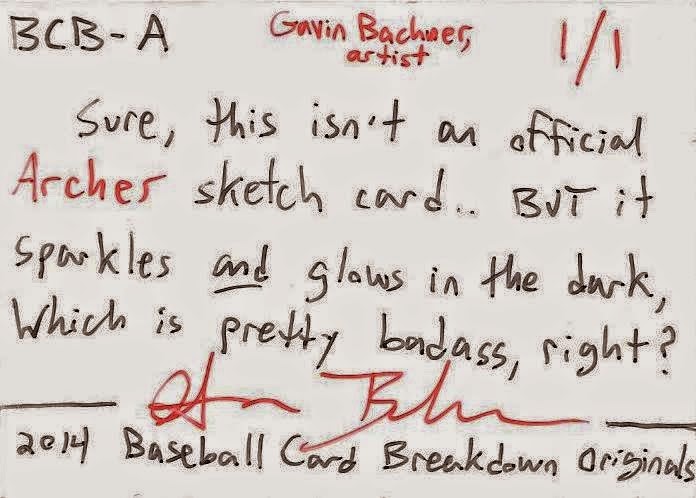 I needed a little something extra to balance a trade with Dimebox Nick, and a sketch card seemed like a good idea. Since it's Nick, I obviously had to make it out of the ordinary, so I found a source image of Jim at bat during his stint on the Brewers. I'd love a second chance on the face (looks like Randy from Pee-Wee's Playhouse), but oh well. 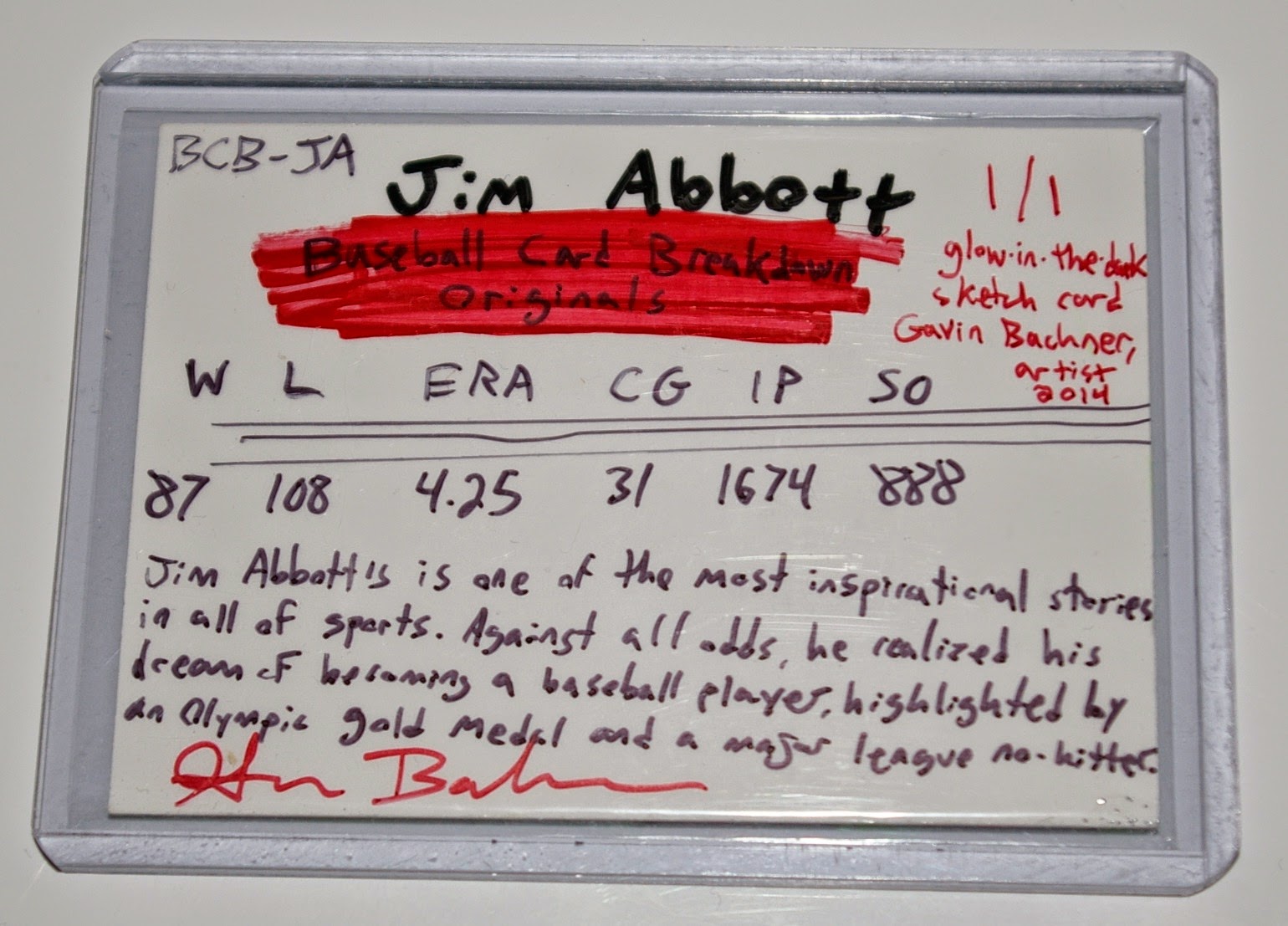 I made this one for Alex at Chavez Ravining recently. It might be my first "by request" sketch card. We were hammering out a trade and he asked if I could whip him up a Kershaw or Matt Kemp. Forgive the racial implications, but black guys are hard to make glow-in-the-dark sketch cards for (I need to find or make some glow-in-the-dark brown paint.) Anyways, this one came out ok. 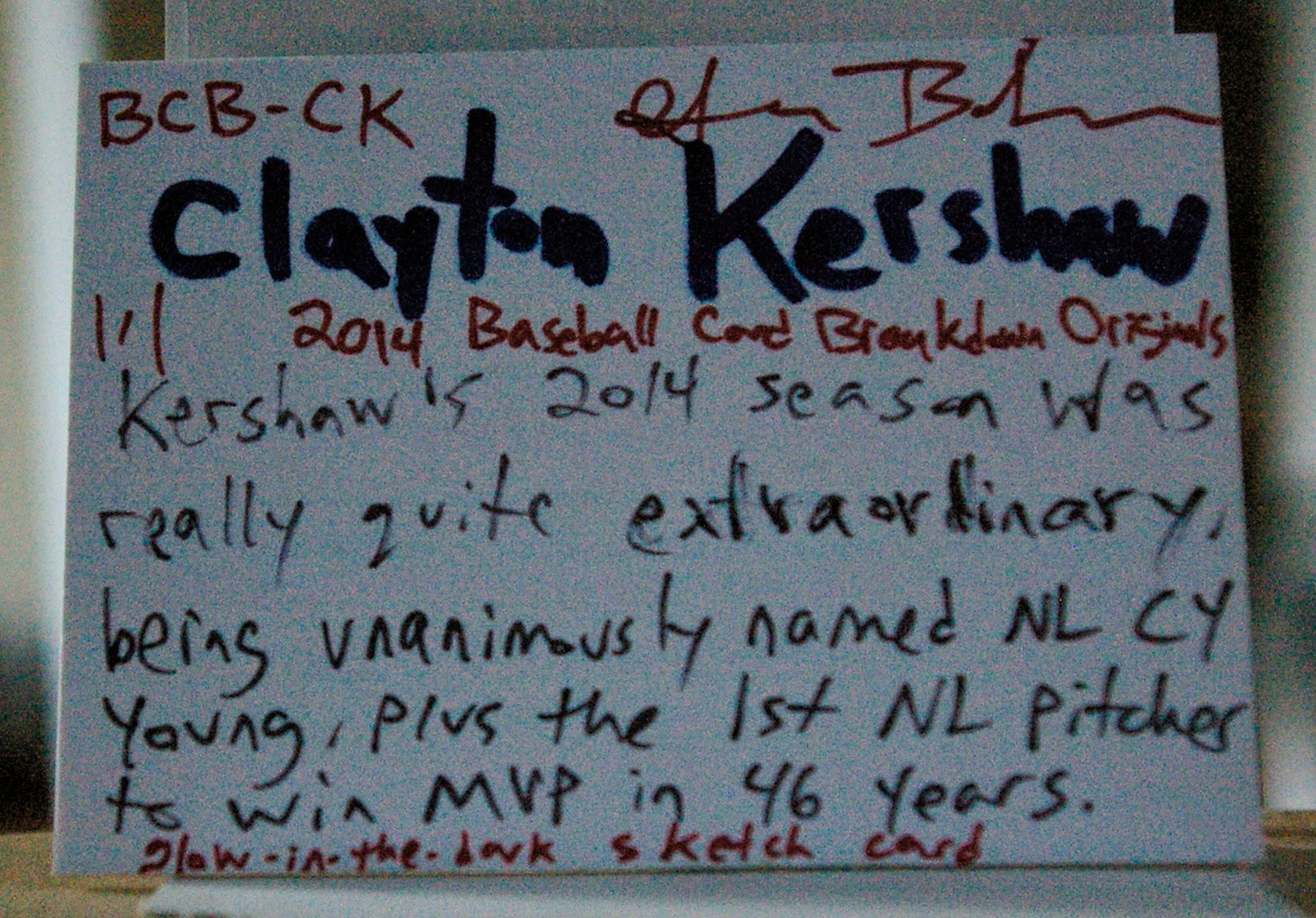 So there are the sketch cards I've made this year. Sure, they're B- "high-school-art-class"-grade projects, but they're fun to make and people seem to be happy when I send them one. As you can see, I didn't really stick with a specific design, though I did favor a horizontal layout, apart from the first one (Yount). I'll try to keep making these and hopefully improving at it. I should also work on the backs more.. at least spend a little more time on my chicken scrawl. I also need to work on doing black guys (don't take that out of context).. I've specifically been wanting to make myself sketches of Nate Colbert and Dick Allen.

I've actually got some new ideas I'm pretty excited about trying, so I might end up putting out an "update series" for my 2014 customs with a few more cards before the year's out.

And I'm open to being commissioned to make a custom card for anyone, either in exchange for cards off my wantlist, or failing that, a few bucks.
Posted by defgav at 3:59 PM