Another eclectic week's worth of cards (Listia, webtraffic roundup)

I've continued my Listia activity lately, essentially "trading" unwanted football cards from that dimebox I bought last month, turning them into cards that I'm more keen on having in my collection (shameless plug to my current auctions).

Let's take a look at what's arrived within the past week or so. 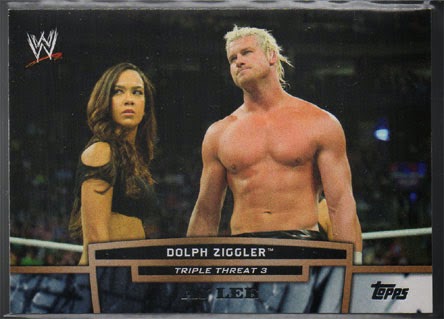 Everytime I post a new addition to my AJ Lee PC, I'm compelled to clarify that I don't watch wrestling at all, I just somehow stumbled upon her picture somewhere and developed a celebrity crush on her. I have no idea who Dolph Ziggler is. I assume it's that big blonde dude. 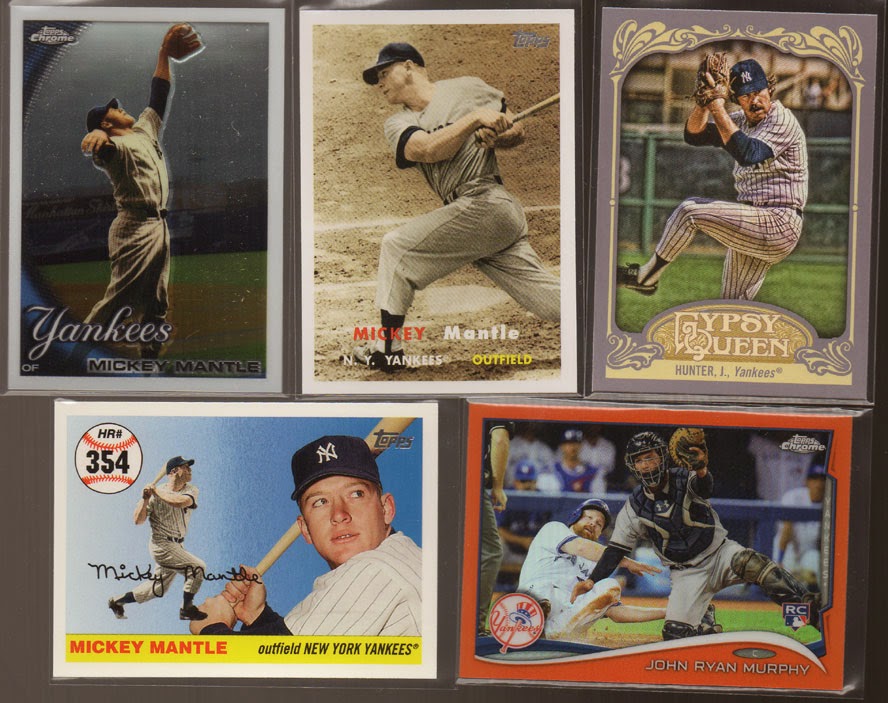 I won the first 2 Mickey Mantle cards separately from the same seller and he was kind enough to throw in some bonus Yankee cards. Catfish, another Mantle, and an orange refractor JR Murphy. Nice. 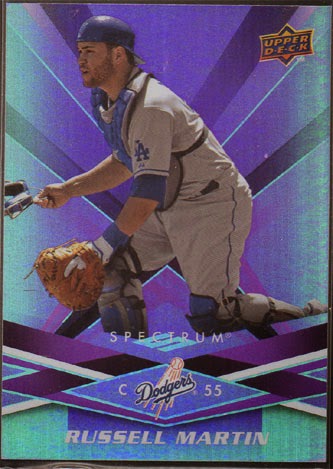 I was poking around in the "ending soonest" listings and found this cheap Russell Martin. Sure, why not. These Spectrum cards are kinda neat looking. 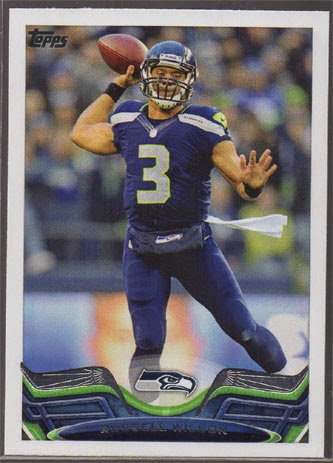 And here's another Russell. Wilson, that is. Again, this was among the cheap auctions about to end and I snagged it for not much credits. As a resident of the Pacific Northwest, I feel like I need at least a little allegiance to the Seahawks. So there, at least I have one Russell Wilson card now. 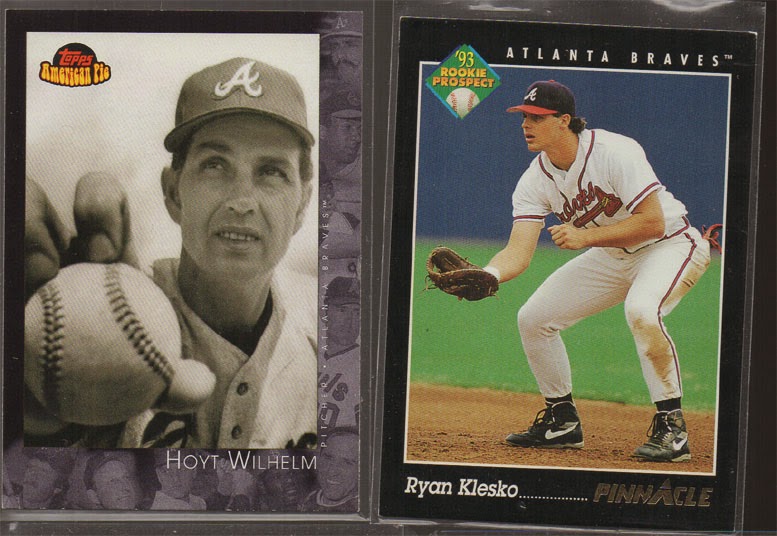 (Yes! I snuck in another Wilhelm Wednesday post! Count it!) A seller had a 7-card lot of junk Braves. I was really only interested in this Hoyt (a rare cardboard appearance of a non-airbrushed photo from his time in Atlanta), but I'll hang onto the Klesko too.

So that's it for this week. Nothing too exciting. I've got some bigger wins on the way, though. So next week's Listia roundup should be a good one.

Since this post isn't very substantial, let's add some filler by trying something different and doing a blog web-traffic roundup as well. I try not to get too hung up on hits and instead follow the adage of "blog for yourself, and if other people like it too then that's just a nice bonus", but it's interesting to see which posts are popular and which just fall by the wayside. And maybe a few of you will get a kick out of behind-the-scenes stuff like this. (And there was an abnormality I wanted to mention, too.)

11/26 - feeling the fuzz (more from the card show) - 55 views. I'm typically happy with the 50-views threshold. Fifty clicks and at least one comment and I feel like it's been a successful post. Under fifty views and/or no comments, the post is a failure in my eyes. And I just cry and cry and cry. Thanks to you wonderful readers, I haven't had a post be shutout with comments in several months, and my posts usually top out over 50 views. Occasionally, I'll crack 100 views, the mark of a really popular post.

11/28 - The Harrowing Tale of Mike Reinbach (Guys from Granite) - 58 views. Not too bad, but I put a lot into that post, so of course I'd love getting more eyes on it. But with a limited-appeal of a post about an obscure player from the 70s who happened to be from my high school, you can't expect much.

11/29 - Making reservations with 2002 Archives Reserve - 47 views. I noticed Blogger didn't end up sneaking this post onto feeds and blogrolls until a few hours after I published it, so by then it was a bit buried and probably got overlooked by some readers. Bummer, but that happens sometimes. It rebounded to almost 50 views, so that's nice.

11/30 - The Wampa Cometh (silent post) - 434 views! Yeah, this was my most successful post in a long time. Maybe I should do posts without text more often. It doesn't seem to be bots, either, but rather real human views. I suspect it has something to do with my tongue-in-cheek plug on Twitter where I said something like, "Here's a blog post loosely based on the script for #StarWarsEpisodeVII." Haha. Hopefully I didn't trick too many fellow Star Wars geeks into clicking. But if so, I hope they got a chuckle out of it, at least.

12/1 - 2014 Baseball Card Breakdown Originals - 67 views. Nice showing for my post featuring the glow-in-the-dark sketch cards I've made so far this year. Obviously a huge drop off from the prior post, but I didn't expect to keep those gaudy numbers up.

12/2 - Morphing faces + Gwynns from the card show - 36 views. Ok, it hasn't been live for 24 hours yet as I draft this, so it could still pick up a few clicks. But it doesn't look like my "in action" Sportflics gif and an assortment of Tony Gwynn dimebox pickups are lighting the blogosphere on fire. 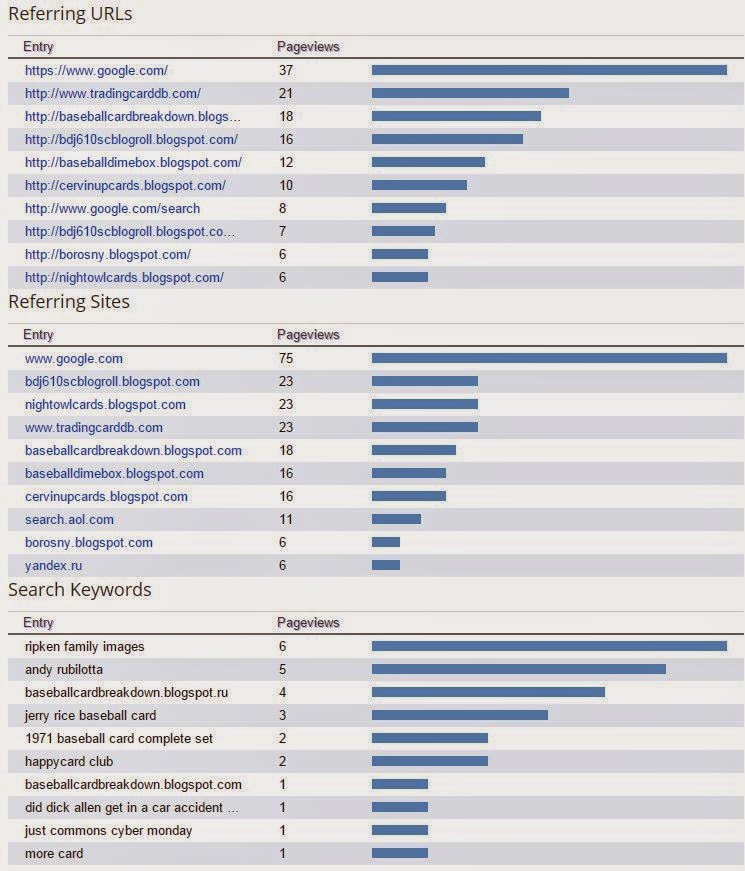 Interesting to see which blogrolls refer the most action. And the keyword searches never fail to include at least a couple crazy ones to make you scratch your head. I hope the answer to the Dick Allen question is no.
Posted by defgav at 4:00 PM