A little early Christmas gift to myself, I bid on and won an auction for a hobby box of 2014 Panini Prizm Perennial Draft Picks Baseball (rolls off the tongue, doesn't it?) and it arrived yesterday. While I had toyed with the idea of saving it for an after-Christmas pick-me-up, my willpower was weak and I ripped the whole damn thing within a half-hour of coming home from work. I was hoping for a good Gavin LaValley card (stay tuned for my big Gavin LaValley post coming 12/28! [his birthday]). While I struck out on LaValley, it was a decent box.

Here are the hits. Nothing I'm particularly attached to, so all trade bait, btw.

I don't know anything about these kids, and with the holidays n' all, I don't have the free time to really research them much more than finding out the round they were drafted. 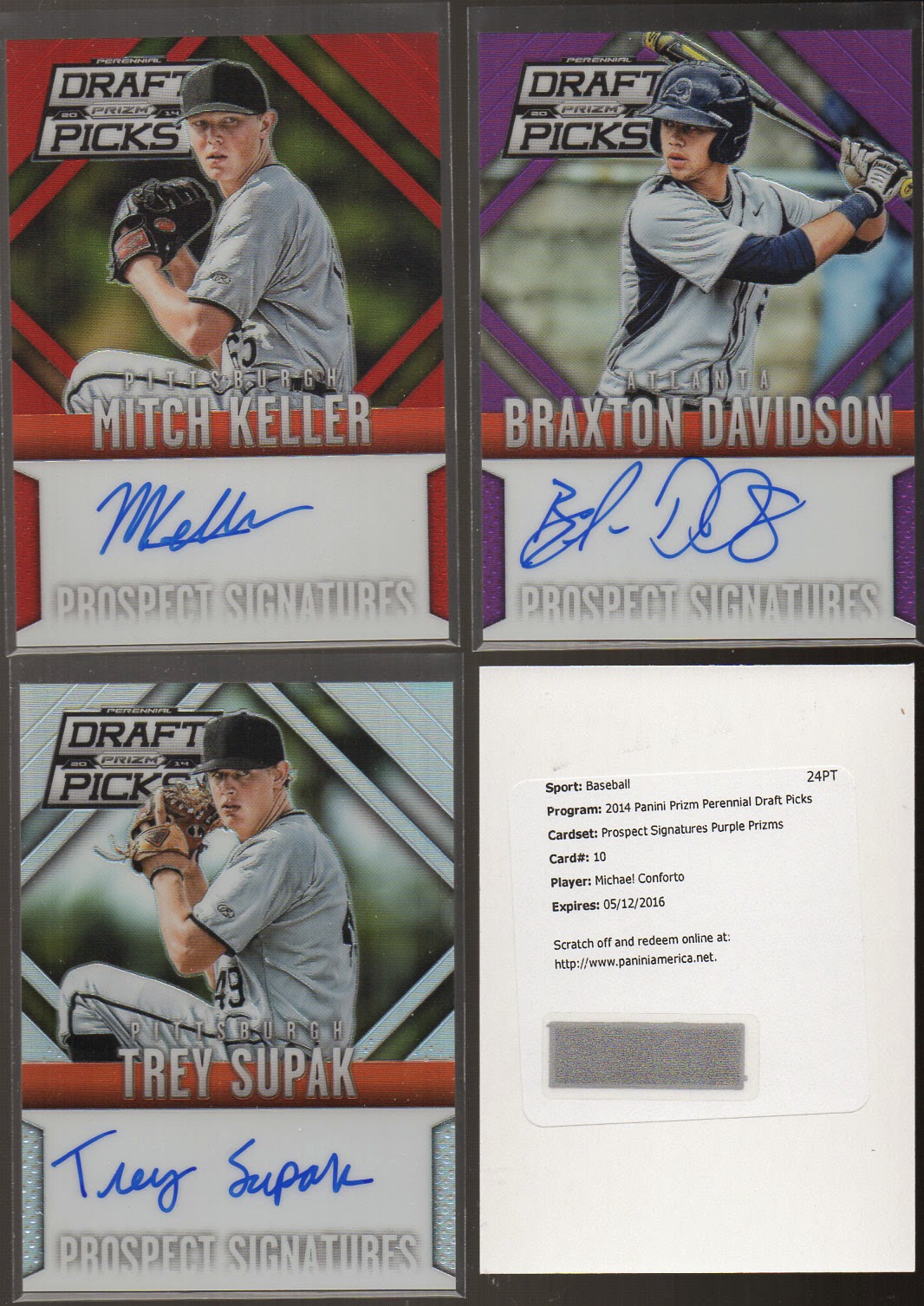 Michael Conforto [redemption, #'d /149 purple parallel] - 1st round draft pick by the Mets in 2014 (10th overall). Put up a nice 2014 in his first pro season in Brooklyn. Hate to say it, but this placeholder might be the best pull of the box.

Four autos in the box, three of which are #'d parallels.. nice! But one is a redemption, and with my frustrating track record of getting mail from Panini, I really don't want to redeem it, so hopefully one of you readers makes me a trade offer for it, or else maybe I'll put it on eBay for a few bucks. The in-hand autos include 2 Pirates prospects (which have already been set aside for Matthew Scott) and a Brave, which are welcoming to see. Always nice when you can avoid pulling hits of relatively-unloved teams. 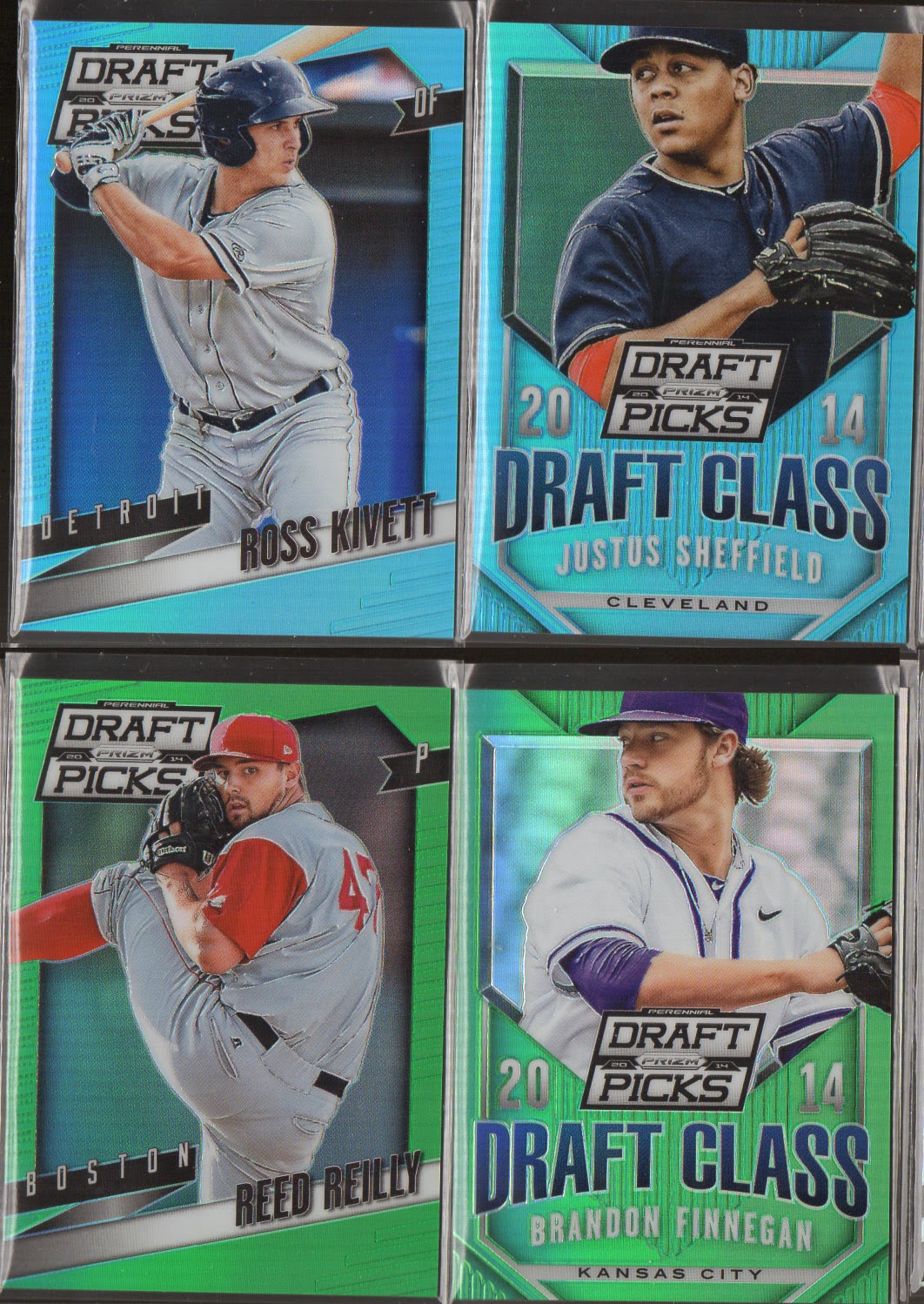 Brandon Finnegan (#'d 20/35 green) - Royals 1st round pick in 2014, 17th overall. Got called up to the majors and became the first player to pitch in a World Series and a College World Series the same year.

A nice bit of color in this box between these and the autos. 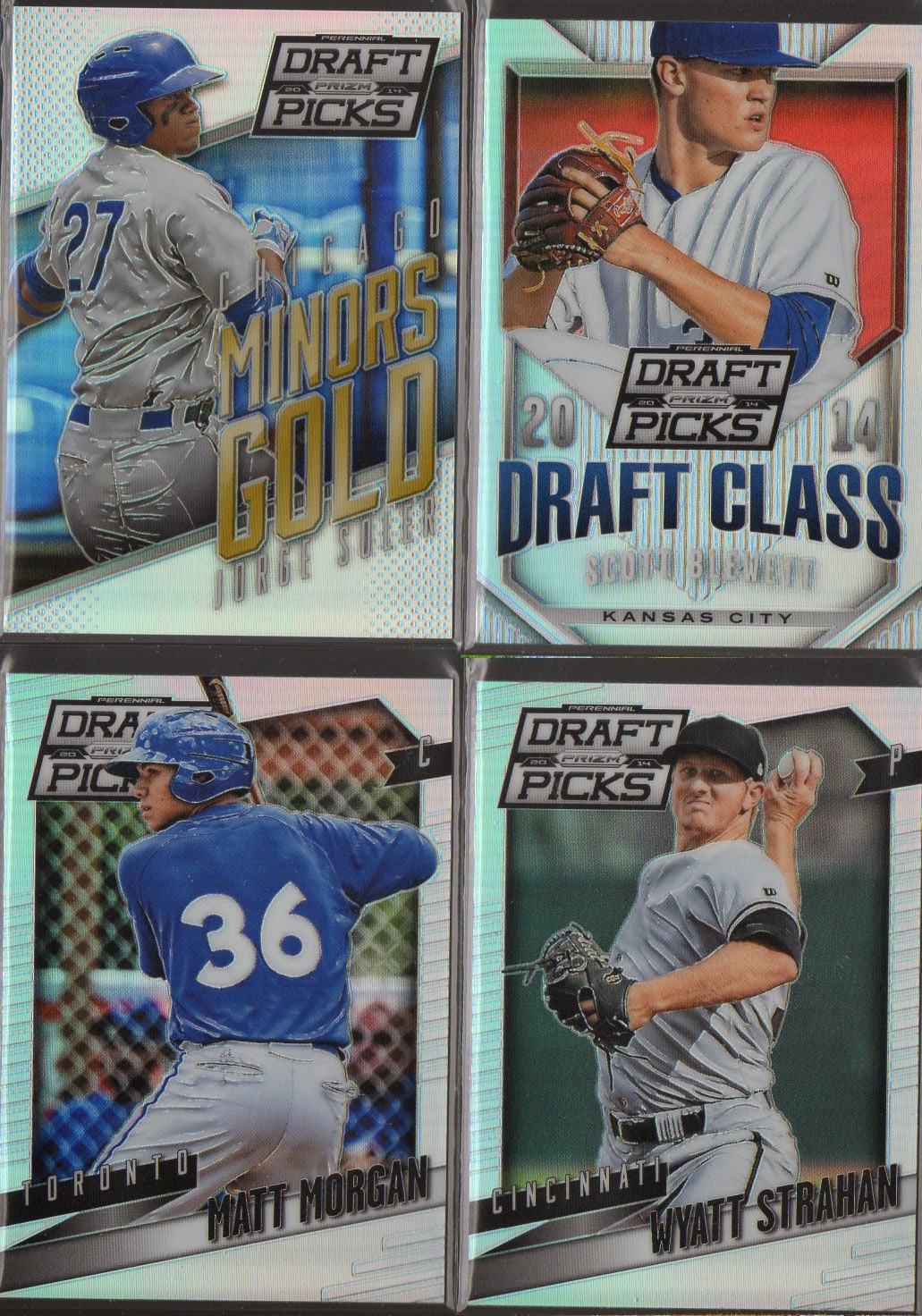 Jorge Soler - Cubs signee from Cuba who's put up some good numbers in the minors and got called up late in the 2014 season.

Scott Blewett - Royals 2nd round pick in 2014. I remember Zippy mentioned him recently because he has a funny name for a pitcher.

These four aren't numbered or anything, but are nice looking shiny cards.


So there you go. I didn't pull any big names or really low-numbered cards (or any Gavins), but not a complete bust. All 4 autos were from teams with several active collectors on the blogosphere (Pirates x2, Braves, Mets), so they're nice as trade bait at least. Plus it wasn't all that expensive for a hobby box. (~2.3 blasters shipped.) I didn't scan any of the base cards, but that's because I didn't pull anything notable there.. just more dudes I've never heard of. But who knows, maybe there's a future star in there somewhere.

Again, everything in this post is available for trade, so check my wantlist and get in touch if something caught your eye. Thanks and Happy Holidays!
Posted by defgav at 3:57 PM