I hope everybody had a funderful Christmas. Mine was great, though not without its minor obstacles to overcome (I came down with a cold.. my wife forgot some stuff). We decided to stay an extra night at the in-laws, so we got home this morning just with enough time for me to pack up my stuff for the day and head out to work (bummer working the day after Christmas, especially when it's a Friday, and especially when you're sick). I didn't have time to really prepare a new post for today, but I'll post essentially a repeat of last year. I always look forward to 12/26 because that means... 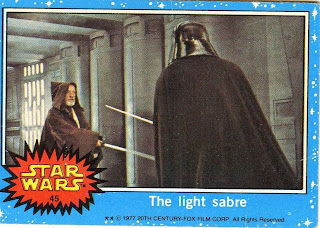 Just a quick break from baseball cards to share word of this joyous event I've celebrated the final week of December every year since 2007.

The Festival of Lightsabers is the tradition of watching a Star Wars film each day between December 26 and 31. It's a terrific way to beat the post-Christmas blues and kick up the holiday season during that lull between Christmas and New Years. Hey, great excuse to experience the Star Wars saga in a special way!

The traditional schedule is as follows:

Modifications are allowed however. For instance, one year you can watch the original theatrical versions of the trilogy, and the next year you can mix it up with the "special edition" newer versions. Also, it is permitted to swap the prequels with other Star Wars related entertainment (because really, suffering through The Phantom Menace every frickin' year is simply asking too much!) For instance, in place of a prequel you could watch the animated Clone Wars series, the Star Wars Holiday Special, or even something like the Family Guy or Robot Chicken Star Wars specials if you like. The prequels can also be made more tolerable by playing them along with Rifftrax commentary or watching fan edit versions. If you get busy and have to skip a day, it is permitted, though not encouraged, to "double up" with 2 films in a day, or even bump the festival a day, thereby concluding on January 1st.

So those are the basics. I encourage everyone to take part this year and hopefully make it an annual tradition of your own!

Last year we watched it in the "machete order" for the first time.. that was cool. Thanks to Bo in the comments last year for the suggestion. I'm still undecided on the films/order this year, though I think we'll start off tonight with some animated Clone Wars, or maybe even watch Fanboys.

I'm excited for the new Star Wars films coming out from Disney starting next year, though I'll be a little sad that the traditional Festival of Lightsabers schedule will no longer fit perfectly between Christmas and New Years. Maybe we'll go ahead and watch in the traditional 6-film order this year for one last time. Lord knows I may never be bothered to watch Phantom Menace again otherwise.
Posted by defgav at 2:18 PM