I've been wanting a Ken Caminiti auto for a while now and recently picked one up. He was a big bopper in the Padres' lineup for 4 years in mid/late 90s, a key piece of the success the team had in '96 and '98. He put up some impressive numbers, especially 1996 when he became the first (and still only) Padre to win the NL MVP award. This was during the height of my fandom (ie, watching nearly every Padres telecast), but I wasn't collecting cards in those days, so I don't have much of a cardboard cache of the guy today. His story took a sour turn when he admitted to PED usage (in hindsight it was obvious-- nearly everybody was juicing back then-- at least he manned up and was one of the first from that era to admit it), and then it came to a somber end when he died in 2004 of a drug-related heart attack. 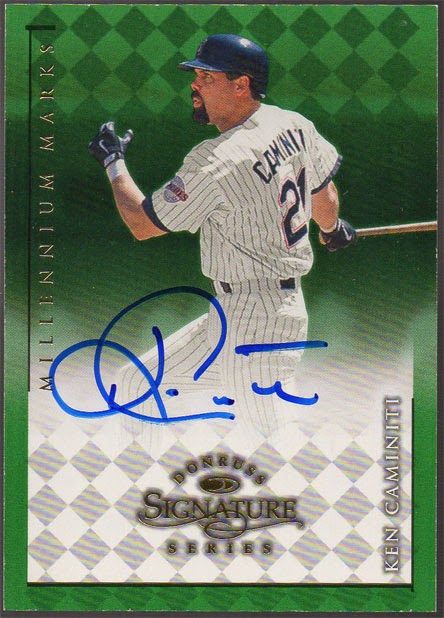 Pleasing design. Not the greatest signature ever, but it has some uniqueness to it. 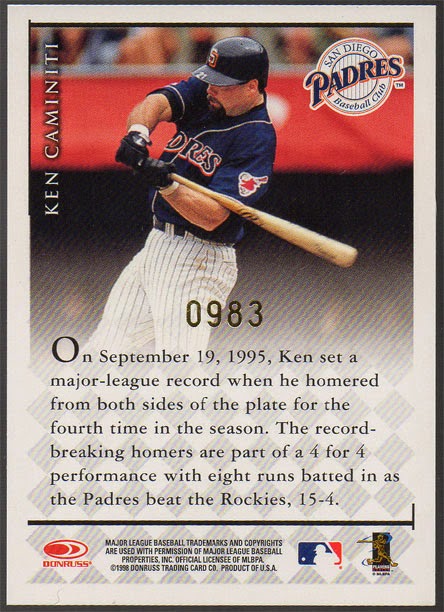 I'm not sure what the print run is on these (Don't you hate when a card is serial numbered with a numerator but not a denominator?).. Beckett says 900, but that's obviously not the case. I'm guessing 1000, maybe 2000, but I'm not sure.

That's right, 983. I own the "Career RBI eBay 1/1" of this card. I always love trying to find some significance to big serial numbers, and once in a while you get a good one like this.

Rest in peace, Ken. Thanks for the memories.
Posted by defgav at 4:03 PM