There have been 7 graduates from my high school to play in the major leagues (Granite Hills High School in El Cajon, California representing!) I've managed to obtain at least a couple cards from them all. I'm tipping my cap to each of them in this Guys From Granite series. We're counting them down in ascending order by career games played, working our way to the most successful GHHS Eagle. This is part 2 of 7.

Here's the first guy on the list I went to school with concurrently. He was a year or two ahead of me. I don't recall ever having any classes with him or anything. Truth be told, before researching the list of players from Granite Hills, I had no idea he ever went pro, much less actually cracked the bigs for a short time. Kinda blew my mind! "Hey, I remember that guy! He made the majors and even got a few baseball cards made?! Wow!" I remember him being a star on the high school baseball team, but didn't realize he was able to pursue that as a career. I don't remember him much other than thinking he seemed like a big, mean jock whom I definitely would not want to bump into in the halls. But looking back, I don't think he really did anything to deserve the "mean" tag. It was probably just that he was big, quiet, and usually had a serious look on his face. The autographed cards of his I've seen on eBay often seem to have "John 3:16" inscribed on them, so turns out he's keen on Jesus, which is often (not always) a sign of being a good person. So I apologize to Mr. Barnes for remembering him in a negative light in a deep, dusty corner of my mind these past 20 or so years. You're all-right with me now, John! I think it's super cool you became a professional baseball player, and I'll try to hunt down all your baseball cards for my collection.

Let's look him up in my yearbooks... 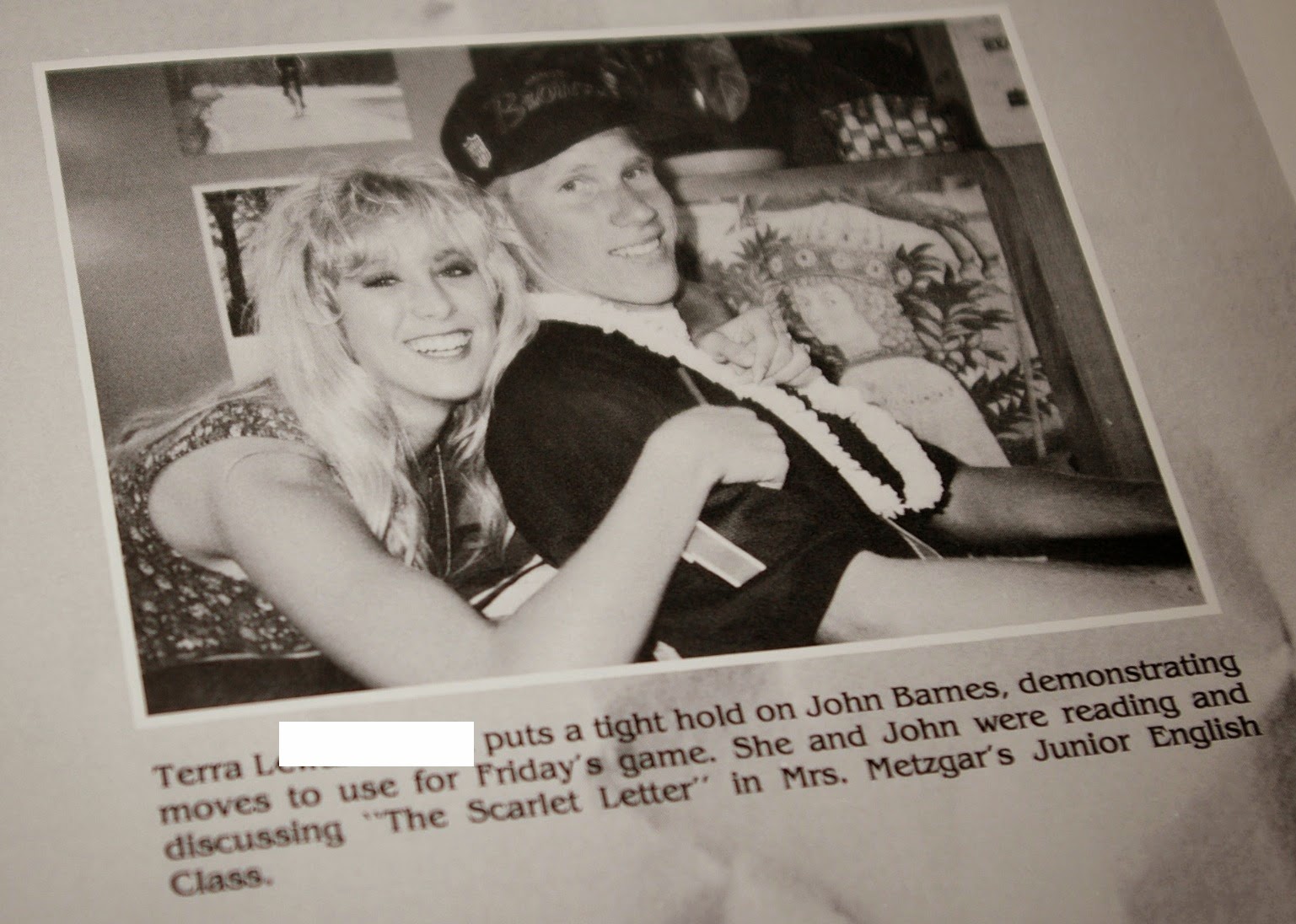 Wow, he's all over the 2 yearbooks I share with him. The guy was pretty popular. In addition to baseball, also excelled at football and basketball. [HT] (Don't ask me why I blocked out Terra's last name.. I guess she just looked kinda "stalkable" and I wanted to protect her from any crazies out there. LOL. Jill (below), on the other hand, looks like she can take care of herself just fine. By the way, I'm totally making "hidden text" a reoccuring thing on my blog. I won't always announced it like this, though, since that's not very well hidden. I'll probably have a notation like "[HT]". So remember if you see [HT] on my blog followed by some blank space, there's probably some hidden text there.) [HT] I still have my letterman's jacket like the one John is wearing above (my sport was track). A few years back, I got it out of "storage" and took off the patches and the stitching for my name. Now I wear it as a regular winter jacket. Hey, the thing wasn't cheap! And I wasn't that sentimentally attached to it, so why not. I've definitely gotten my money's worth out of the thing. It's pretty warm. Probably too warm for San Diego, honestly, but great for Portland winters. But yeah, back in the day, I'd wear it to school in the mornings and then basically have to carry it around for the rest of the day when the temperature warmed up. 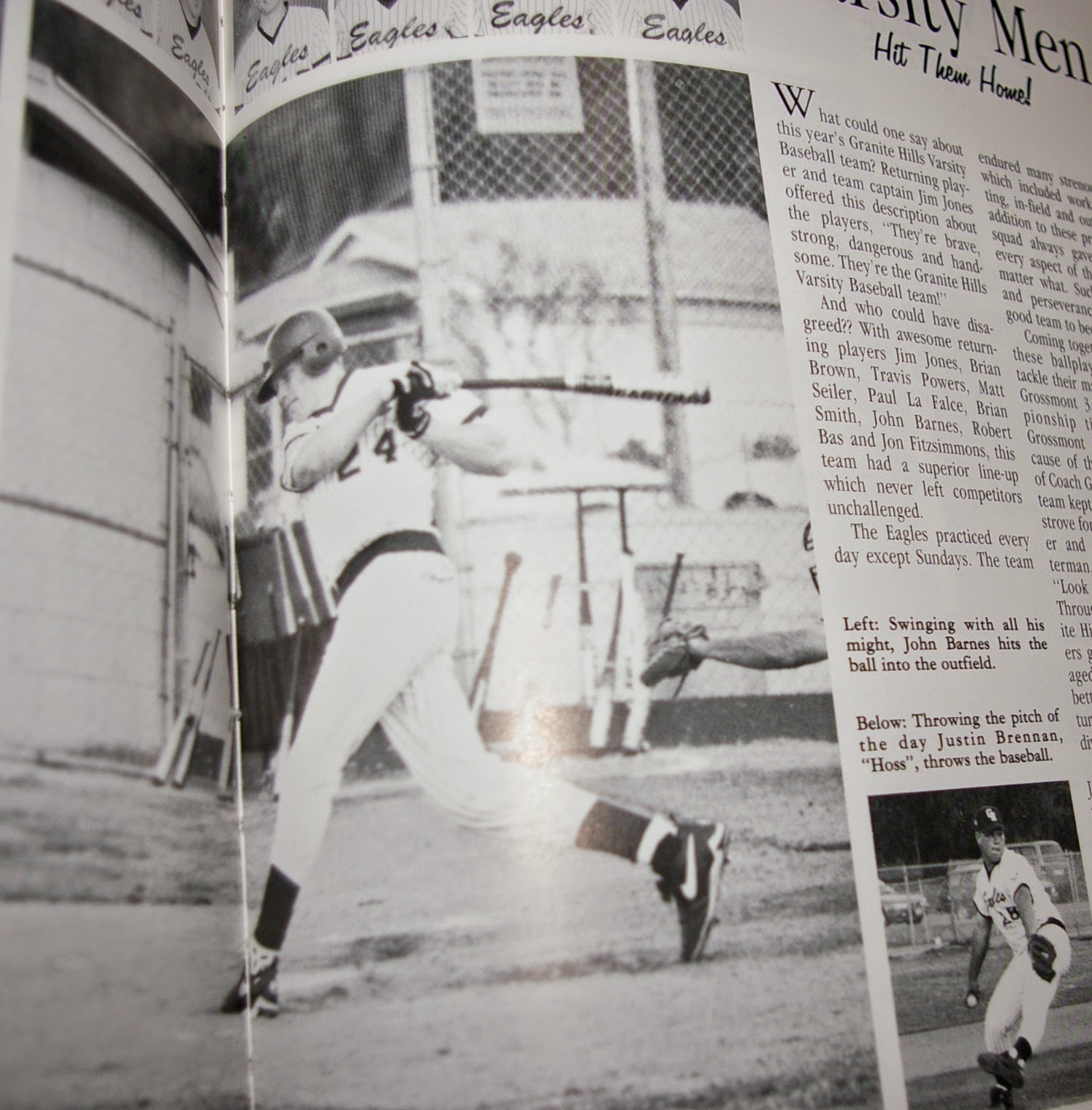 But back to an attempt at a bio: John Delbert Barnes was born in 1976 in San Diego. After graduating from Granite Hills, he spent a year or so at nearby Grossmont Community College before being drafted as an outfielder by the Boston Red Sox in the 4th round of the 1996 MLB June Amateur Draft. Just a couple years later, the Sox sent him to the Twins with a couple other prospects in a deal for Orlando Merced and Greg Swindell.

Barnes tore up AAA in 2000, crushing .365 with good pop, earning himself a September call-up to the Metrodome. He made his debut on the 16th of that month, walking in his first plate appearance and singling the next, driving in David Ortiz. He finished the year with an impressive .351 average over 11 major league games near the end of the season. Things had to have looked bright for the 24-year old.

But of course life is rarely that easy. Barnes spent most of 2001 back in AAA. He didn't have any luck in limited action back up top, managing just 1 hit in 9 games that year. After the season, the Rockies picked him up off waivers and he would bounce around from organization to organization for the next few years. Although he had a few more solid years at the plate in AAA, he couldn't crack back into the big leagues.

Not one to give up, he made a drastic change in 2006 by converting to a knuckleball pitcher for the organization that originally signed him, the Red Sox. While he had a few good stints working his way back up the ladder over the next couple seasons, he advanced to AAA Pawtucket but wasn't able to make it all the way up to the majors, and was done after the 2007 season.

He gave it a good run, though! Having minor league success both as a hitter and a pitcher is quite a feat. And getting to brag that you knocked in David Ortiz with a line-drive in your first major league at-bat has gotta be priceless. You made Granite Hills proud, John!

A Google search turned up his LinkedIn page. Looks like John went back to school, attending California University of Pennsylvania, and currently works as a Patient Care Coordinator in Modesto, California. He also gives private hitting lessons in his spare time.

John Barnes was a legitimate hot prospect there for a while, and as such got a few baseball cards put out, most notably a few Bowman cards and a multi-player rookie card in 1998 Topps flagship. According to Beckett, he's got 36 different cards:

I've currently got 9 of them. 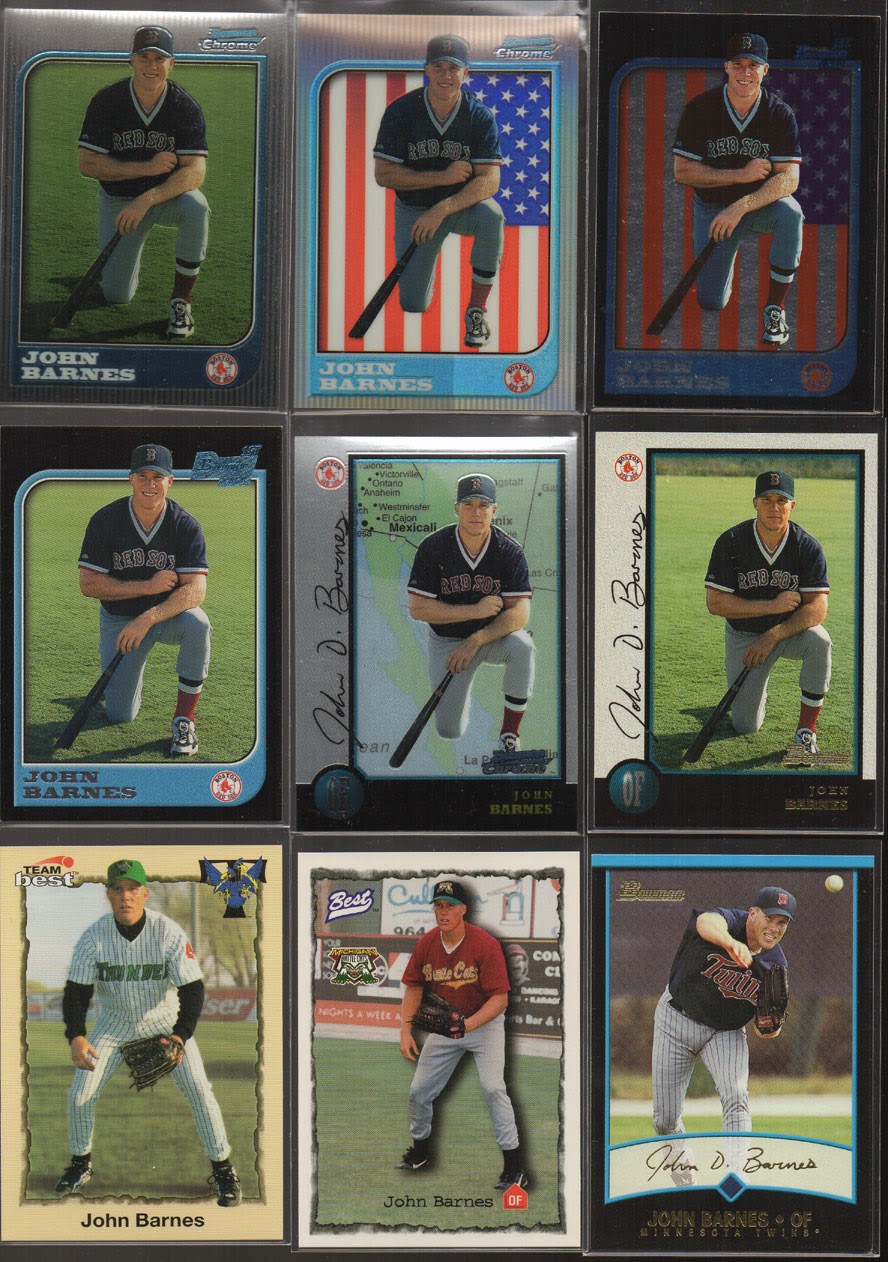 If you have any cards of this guy that I need, feel free to get in touch with me about a trade. Thanks!

With all those prospect cards, it's kinda surprising that he never had a certified auto put out. So I settled for a non-certified one for cheap on eBay.. (well, technically it did come with a COA.) 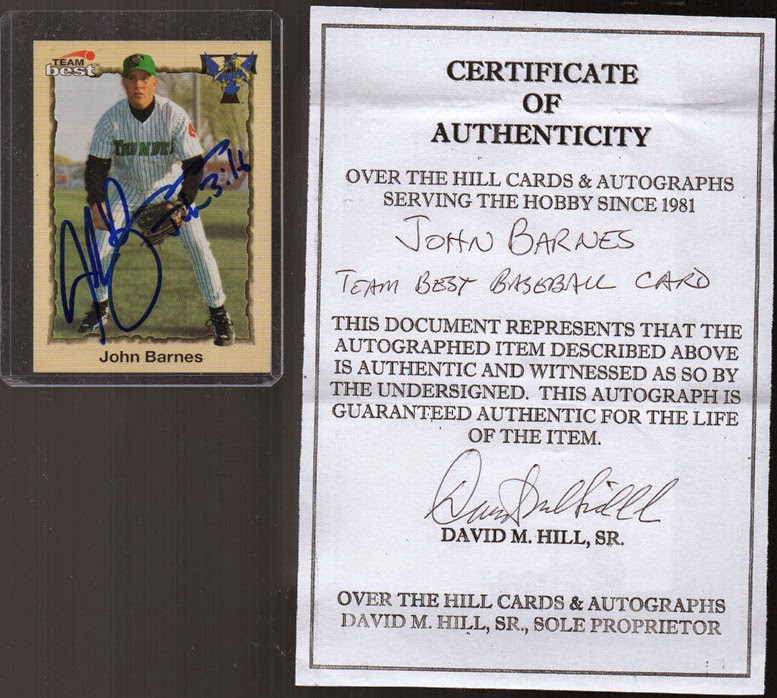 Does anyone give any worth to "homemade" COAs like this? I sure don't, but the card is as good as officially-certified in my mind, since forging a signature with a bible verse inscription would have to be punching a ticket straight to hell, right?

Next up is a guy, not unlike John Barnes here, with a common name. In fact, when you hear his name you might think, "oh, that guy," but no, it's a different guy.