The dawning of the Gavin LaValley era!

Gavin LaValley baseball cards are here! It was just a while back I noticed he had made his professional debut, and I conjectured he'd have some baseball cards on the market before long. That day has arrived, my friends!

I'm super excited about Gavin LaValley. You probably know I collect guys named Gavin. And LaValley has rocketed to the top of my interest list. Gavin Floyd is alright, but is now in the twilight of his career. Gavin Cecchini is cool, too.. but as a recent #1 draft pick of a big-market team (Mets), his card prices seem a bit too inflated for me to chase in earnest.

Gavin LaValley, a 4th round pick by the Reds, is in the "Goldilocks zone" where he has a promising future, yet he's under-the-radar enough that his cards are affordable. I've been wanting to find a card or two that I was excited about enough to dive in and "rainbow" hard (something I haven't really done before, save for maybe that Bip auto from 2014 Archives), and I think I found them.

LaValley has been included in the checklist for two recently-released products: 2014 Panini Prizm Perennial Draft Picks and 2014 Bowman Draft. He's got auto inserts in the former. (Thanks to Doug at Sportscards from the Dollar Store for giving me a heads-up, btw.)

I've spent the past few weeks hunting down all the versions of his cards that I could find (and purchase for a reasonable price). Let's check out what I've acquired so far. 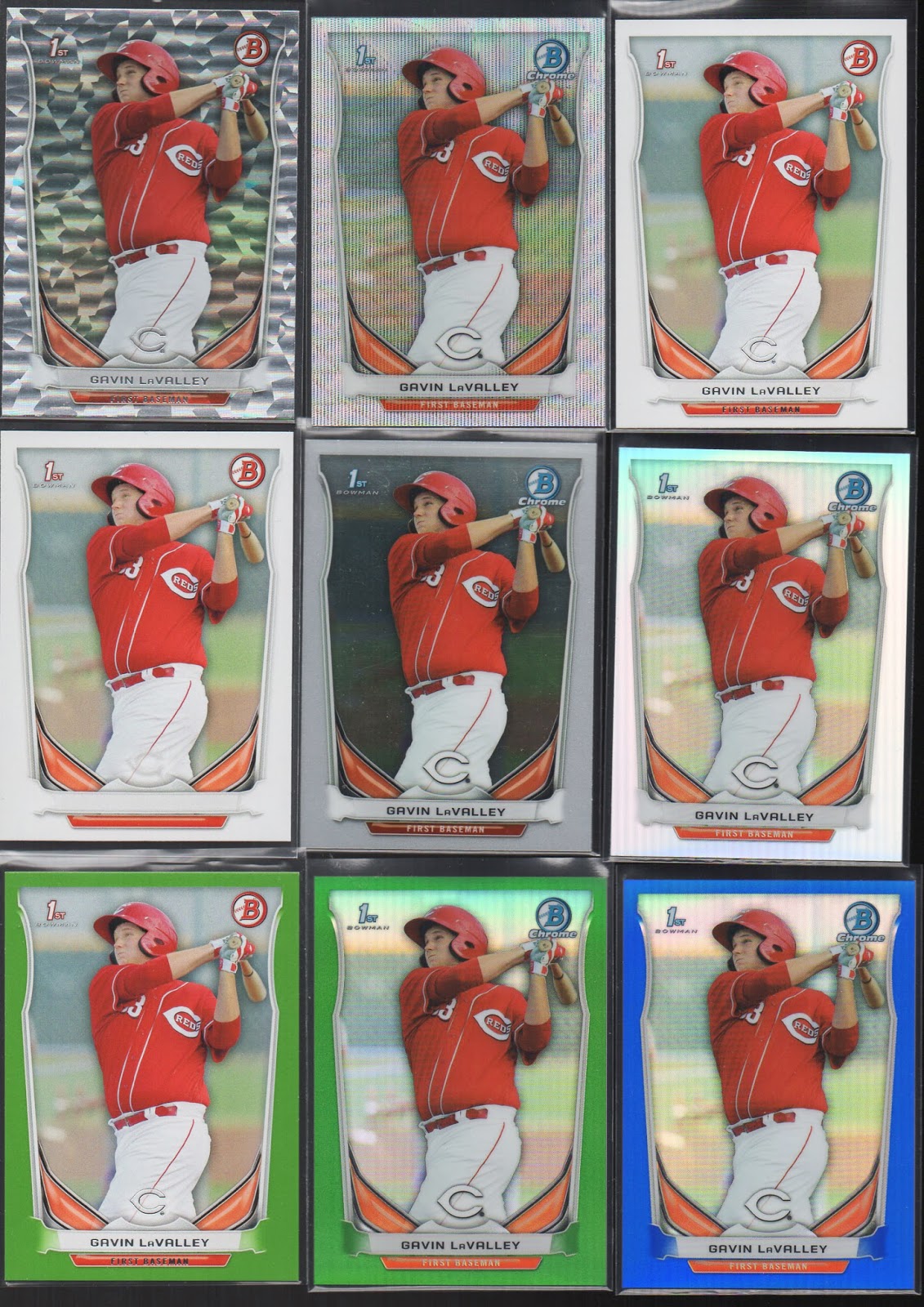 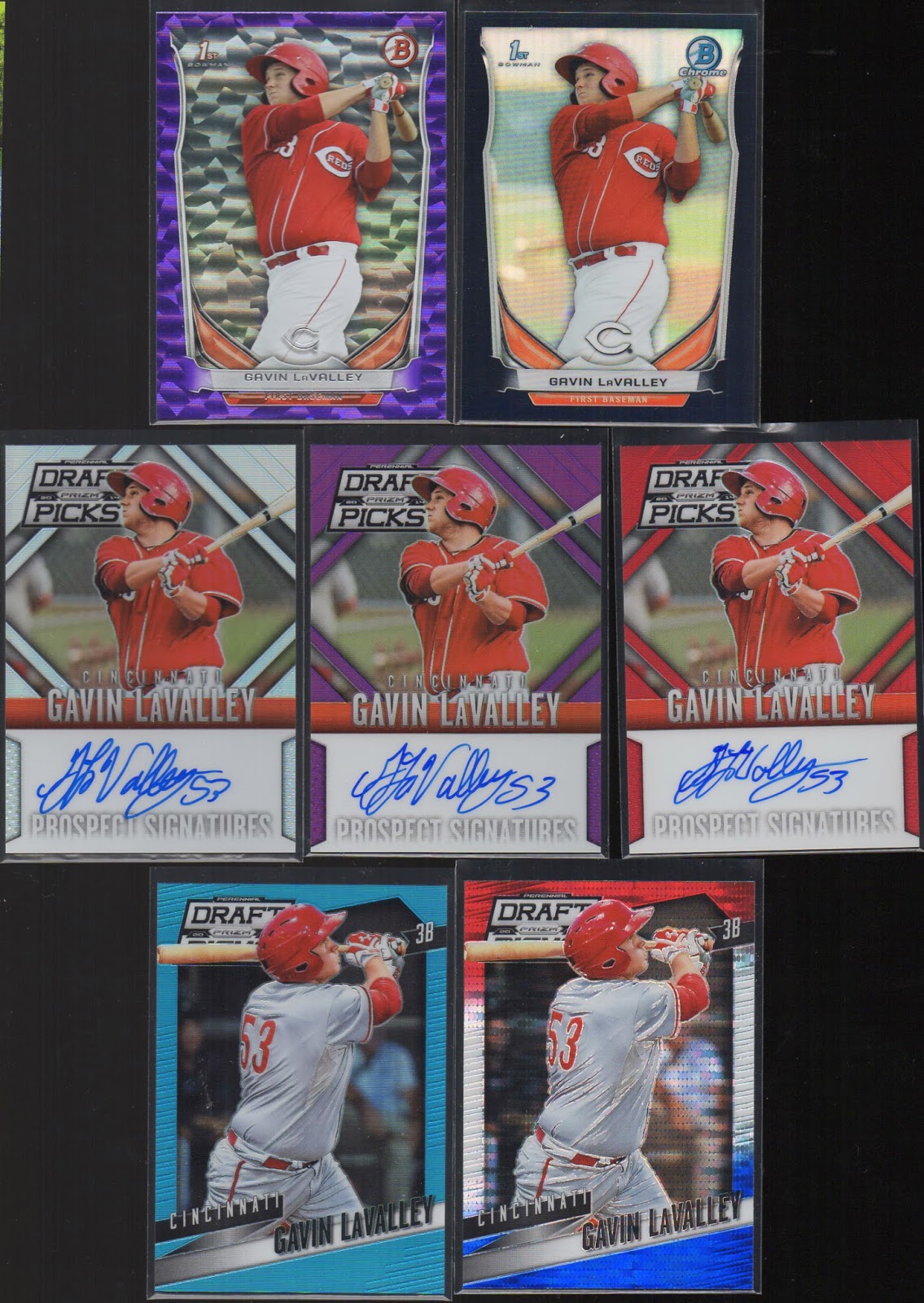 Here are the checklists (thanks to Cardboard Connection)

[Update: cards that I've obtained since this was originally posted are marked in red.]

I bought in with a couple different 10 case Bowman Draft player breaks. Unfortunately, those 20 cases didn't yield anything too exciting. One had a blue refractor, the other had a blue wave (not pictured, as it's still on the way), but no low numbered cards. I was sure I'd get at least one of the 8 printing plates-- 20 freakin' cases! I had never signed up for a player break like that before and I guess I was a little naive. It was cool tuning in and watching some of the live stream of the breaks. But sucks I didn't come away with more good parallels.

(Any interested Reds fans, I've got a ton of dupes available to trade, including dozens of base paper and base Chrome, plus a few base refractors and an extra Silver Ice.)

As far as other disappointments, I got outsniped on the Bowman Draft blank back 1/1. (I can't bring myself to pay more than $20 for these gimmicky 1-of-1s.) But it was probably a blessing in disguise because otherwise I may have foolishly gone down that rabbithole of legitimately attempting to do a "100% rainbow." And that's impossible with the crazy number of 1/1s in this product. I'm saved from that fate by whatever jackass put up a few more cents than me for that online-exclusive 1/1 blank back.

But still, I should celebrate what I do have and not mope about what I missed out on.

I'll keep an eye out for reasonably-priced cards out there as I continue building a nice Gavin LaValley rainbow or two, even if I'm not as gung ho about it as I was out of the gate.

By the way, today is his 20th birthday. Happy Birthday, Gavin!
Posted by defgav at 10:54 AM