Almost done posting my pickups from the last card show. These here are cards of Padres and (once were) Padres. (The non-Gwynns, anyway.) Most of these were from the dimeboxes, but a few were out of the fiddy-cent bins. 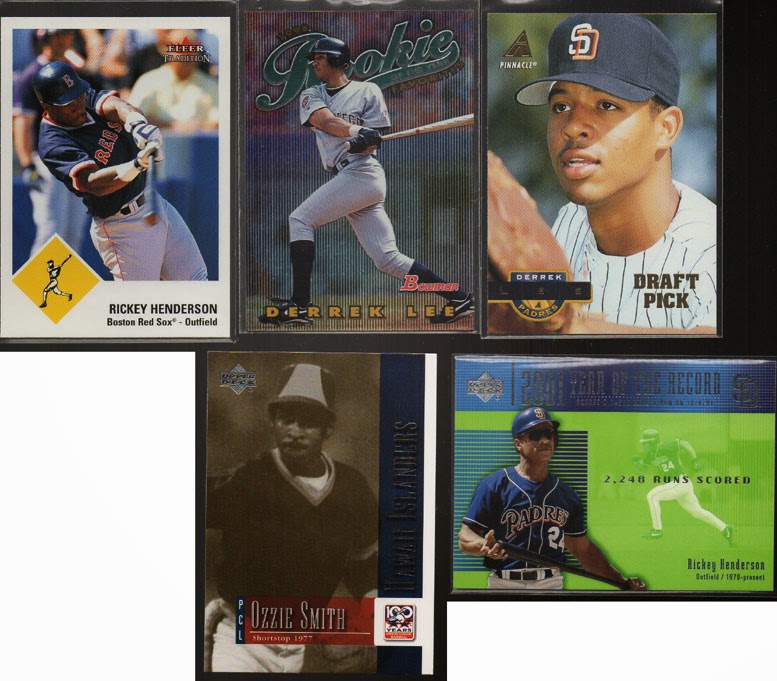 Rickey was a Red Sock, huh? I guess so.

It would have been nice had the Padres hung onto Derrek Lee. But we did get Kevin Brown in exchange, who helped us win the pennant in '98, so I guess it wasn't a complete bust of a trade.

It bugs me when the Upper Deck retro minor league cards seem to just airbrush an early major league photo of a player rather than actually use a photo of the player from his days on the farm.  And this Ozzie was made worse by the fact it has the team listed as Hawaii Islanders. Correct me if I'm wrong, but the only minor league stop Ozzie made before getting called up to San Diego was at Walla Walla in 1977, never playing in Hawaii. 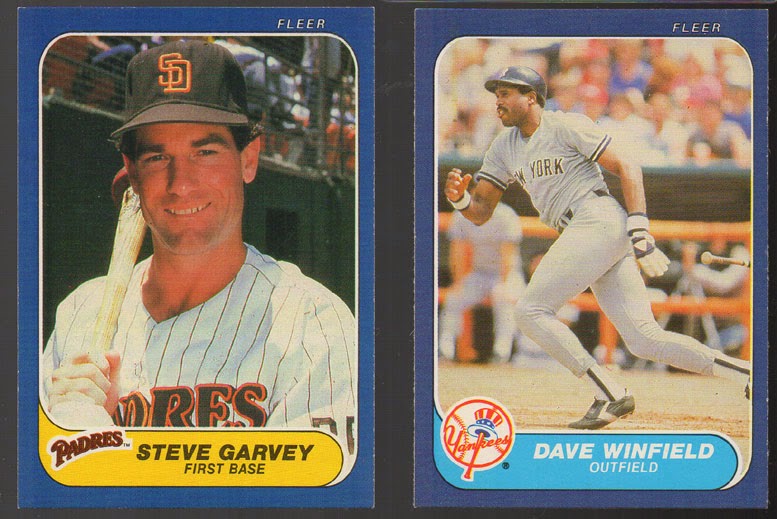 Man, I really have a problem saying no to 1986 Fleer. Pretty sure I needed both of these guys. 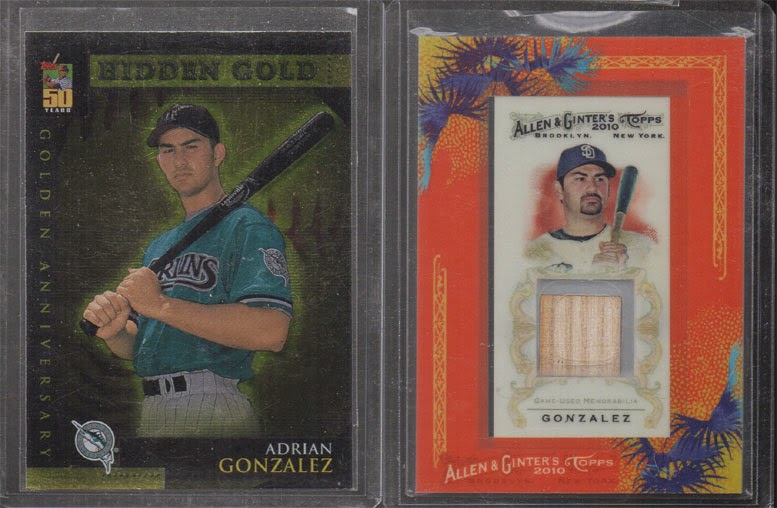 A couple nice Adrian cards., a rookie(ish) and a relic.

Some McCovey cards. That Fleer photo is awesome, one that I hadn't seen before. Looks like another fail by Upper Deck in the middle, passing off an airbrushed early Giants photo as a minor league photo. The card on the right is fine, but seems like we've seen that image on dozens of other cards already. 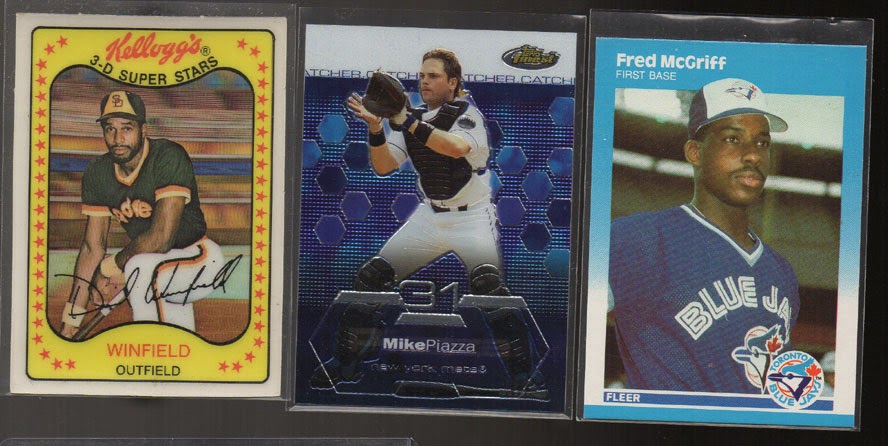 Always love to see Winfield in the brown and gold. I already had that 87 Fleer Update McGriff, but for a dime, I'll pick up another. Anybody need it?

Now we're getting gimmicky, with a Crime Dog "credit card" and a dumb-looking Maddux diecut insert. And flipping them over...

I love how the back of the "credit card" keeps up the shtick of looking like a credit card (If only that was an authentic signature!) And on the Maddux, you can see why I bothered to add it to my stack: I'm a sucker for a serial number.

This is my first of those crazy Topps Laser cards with the intricate diecut action going on. I took Piazza here outside to try to give a good view of it's diecuttedness, but it didn't work out that well. By the way, it's in a penny sleeve.. the clear parts are all cutout, not acetate, in case you're not familiar.

And here's another diecut in the outdoors. But this one is acetate in the center clear parts, I believe. It's one of those Hall or Nothing inserts that I first mentioned on the blog last year in a silly post, and now finally own one of my own. 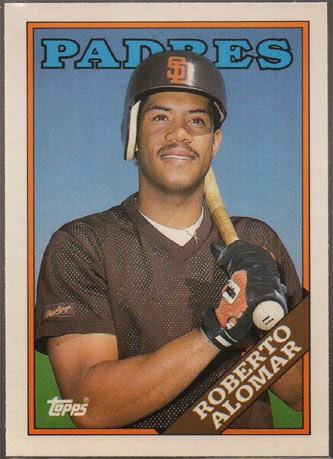 Another Robbie. I have a signed copy of this card, and a reprint, but I didn't have a regular ol' copy. 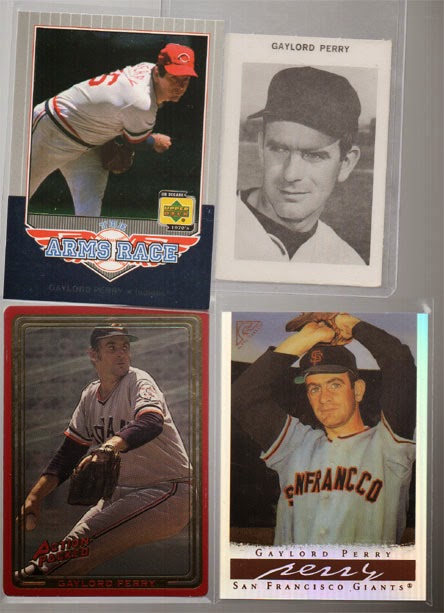 A few Gaylords for the PC. 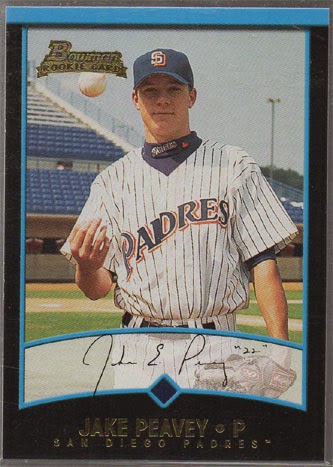 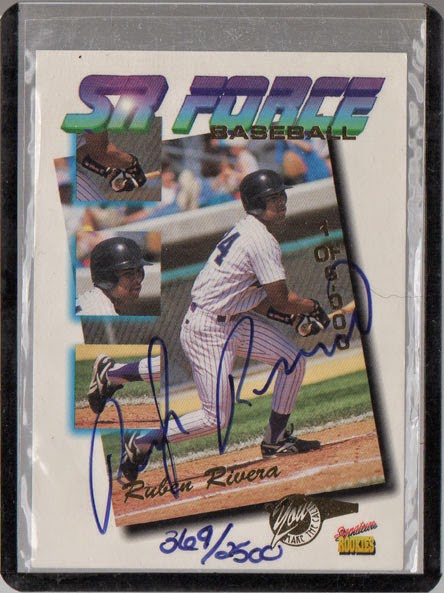 Oh man, Ruben Rivera. Among the biggest busts the Padres have ever known. They had so much patience with him, giving him all the time in the world to develop his potential, but it just never happened. Still, though, for 50 cents, I'll pick up this "warts and all" reminder of late 90s San Diego teams. It's hand-numbered to 2500, though the card says "1 of 6000" on the right. Maybe the other 3500 were unsigned, I guess? 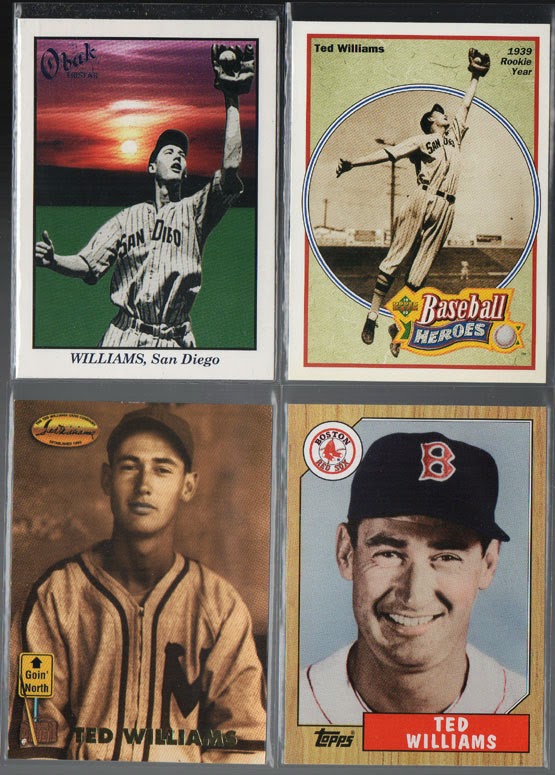 Some nice additions to my Ted Williams PC, including a couple with him in a San Diego uniform. Love em! Marcus has shown these off a few times, and I'm glad to finally pick them up for myself. The 87 Topps style card (I think a Walmart exclusive from a few years back) hooked me thanks to complete career stats on the back.. well, major league stats, I mean. I would love to find a card with his San Diego stats on it. Yeah, I know I could just look them up on baseball-reference, but it's not the same as reading it off the back of a baseball card. 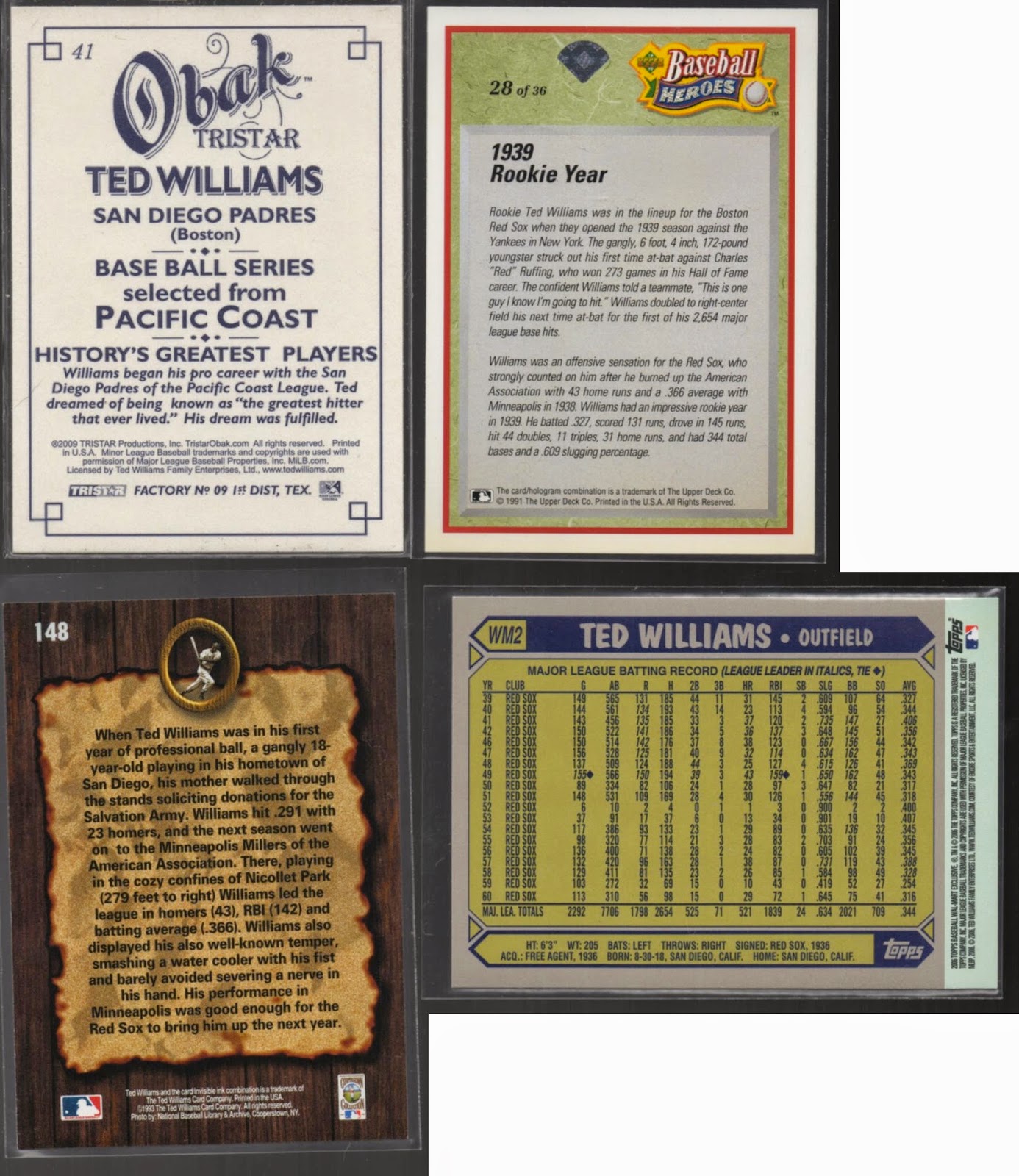 And here are some cards from the other PCL Padre to make it into Cooperstown, Tony Perez. I can't believe I actually paid money for a 1986 Topps single! Only a dime, but still! (Actually less than a dime.. the dealer just asked for $8 for my stack of eighty-six cards.. nice of him.) At least it's possibly the coolest card in the set, with Tony going in for a double high-five with Eric Davis. One of the few memorable photos in that set.

That's it for today. Have a great weekend. Hey parents! Don't forget today (12/5) is St. Nicholas Eve, as I mentioned on a while back, so throw some candy in your kids' shoes tonight.
Posted by defgav at 3:52 PM