My 2018 Box Busting Schedule and more

This plan worked well for me in 2017, and so I'm keeping it going in 2018. I got a bunch of discounted boxes on Black Friday, and I'm rationing them out throughout the coming year. The ol' delayed gratification. Something to look forward to.. don't underestimate it. A nice, regular ripping fix. Also keeps me from spending too much on retail; don't feel like I have to buy something just to buy something. 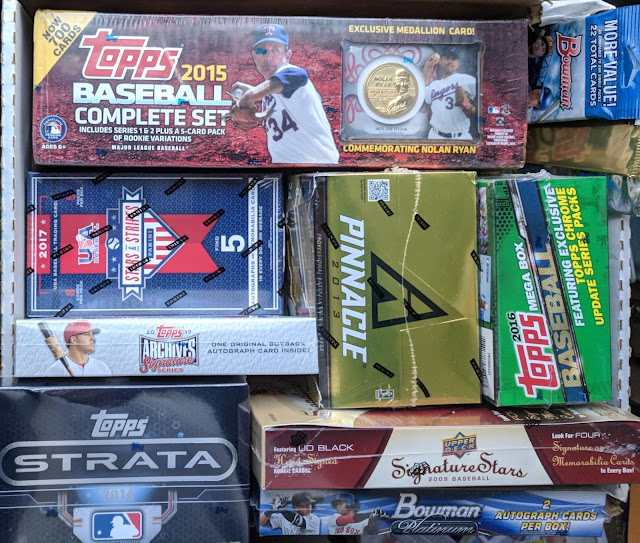 Here's how my schedule looks for the year:

Jan - 2017 Topps Archives Signature Series 'Active Player Edition' Baseball Box
I typically stay far away from the pricey one-card boxes Topps has been cranking out lately, but in a weak moment, added this one to my order. I'm already regretting it, so I'm putting it first so I can get it over with.

Feb - 2016 Topps Strata Baseball Hobby Box
For the same price as the Archives Signature box, I picked up this 2-card box.

Mar - 2016 Bowman Platinum Baseball Hobby Box
This was the most expensive item in my Black Friday order.

Jun - 2018 Topps Archives hobby box x2 (pending purchase)
Not in-hand yet, of course, but I'll likely keep up my tradition of pre-ordering up a couple boxes of Topps Archives. Penciled these in for June, but depending on the actual release date, may end up switching with another month.

Aug - 2016 Bowman Baseball Fat Pack
I didn't quite end up with enough boxes to get me through the year, so a couple months will be sparse, with packs instead of boxes.

Oct - 2015 Topps Complete Baseball Factory Set - Nolan Ryan medallion edition
Picked up the 2015 Factory Set for the price of a blaster. I had been after that Kris Bryant #616 RC for a long time, so hey, this works, plus I get the rest of the set too.

Nov - 2009 Upper Deck Signature Stars Baseball Hobby Box
I ordered one of these last year, but turns out they were out of stock and I ended up with store credit. But this time, I snagged one.


So there's what's lined up for me. Yeah, it can be tough to know they're right there waiting to be opened, but I just label them and hide them away out of sight, and then it's not so bad.

My posts were up slightly in 2017 over 2016, but several of those were from the Big Fun Game, which consisted of many quick posts over the course of 2 or 3 days, so I can't celebrate too hard there. Still though, not that bad.

I feel like I fell into too many "check out these cards I've gotten recently" posts in 2017. While posts like that are the backbone of the cardsphere, I would like to do more different posts. Photoshop fun.. customs.. gifs.. quirky shit like that. I feel like those are the types of posts that put my blog on the map and I've gotten away from them somewhat over the past couple years. Those posts generally take more time/work/thought and I guess I've been busy/lazy. But yeah, I hope to do more "outside the box" posts in 2018.

As far as collecting goals, I'll probably hit those in another post tomorrow or the next day. 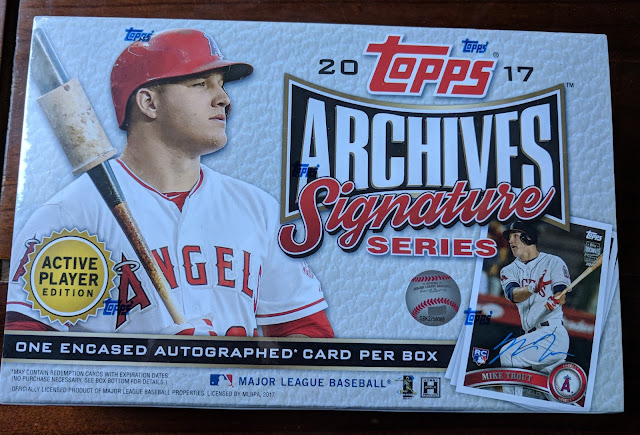 Last time (only time so far) I opened a box of Archives Signature, I hit a nice one with Bo Jackson. Will my luck continue? 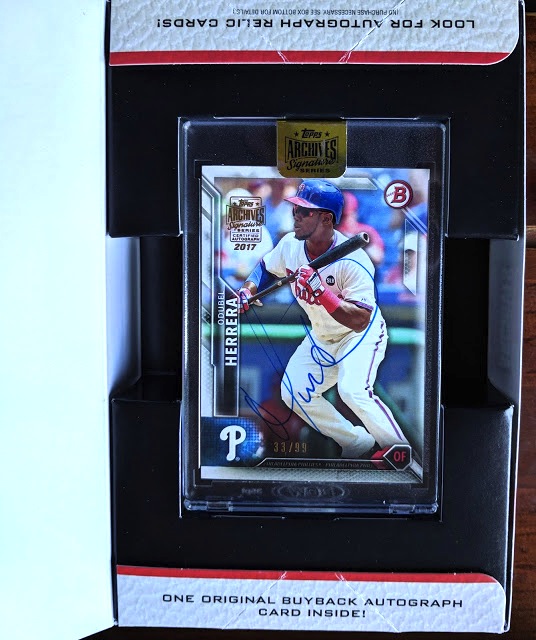 Well, definitely not a big hit, but could do worse than Odubel Herrera. (For example, Henry Owens is in this product.) Herrera is a solid young player with the Phillies. Was an All-Star in 2016. I like the mathematically pleasing 33/99 serial number. 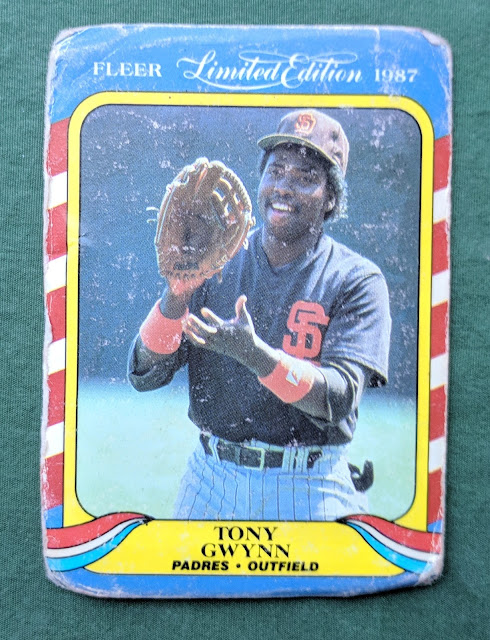 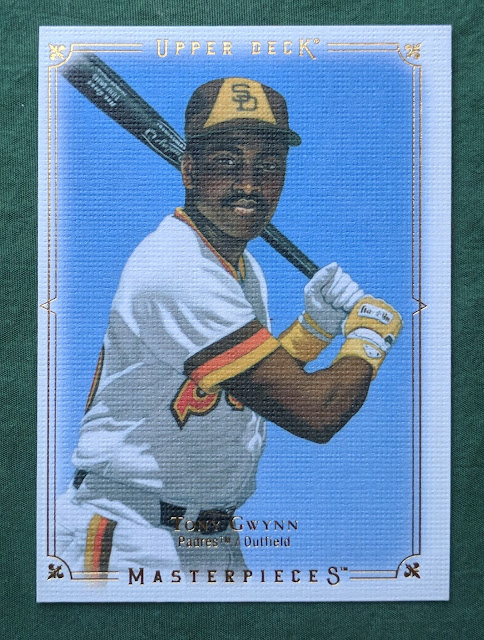 Thumbing through my Gwynn dupes, I went with an UD Masterpieces card for 2018's wallet card. I was a little reluctant to sacrifice such a card for the cause, but hey, it was pretty off-center anyways. I'm curious how the canvas stock will hold up for a year in my wallet. 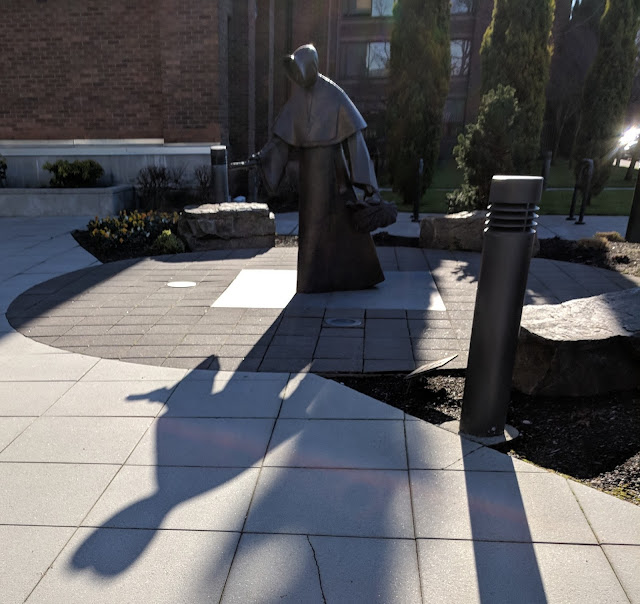 While out walking my dog today by a statue, I decided to take a few pics to ring in the new year. 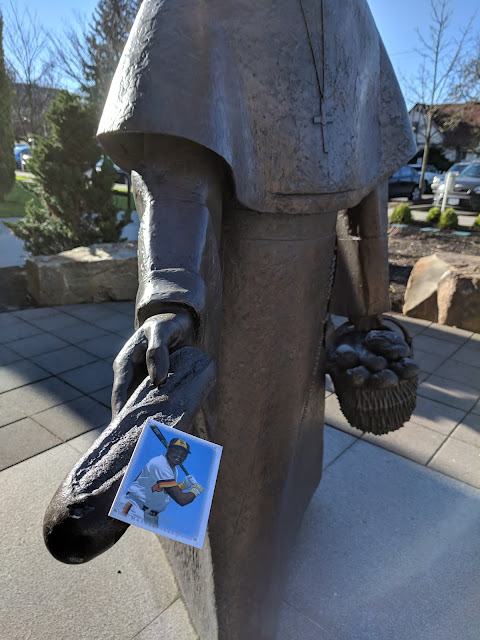 Ha, I snapped this photo just in time, as it's falling off the bread. 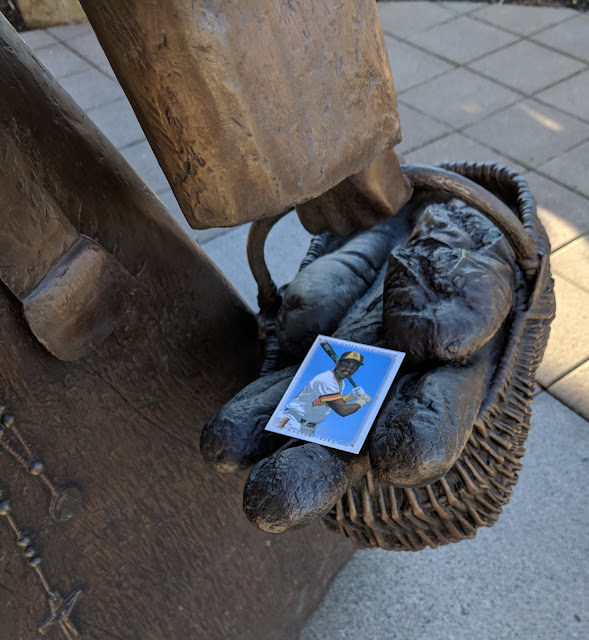 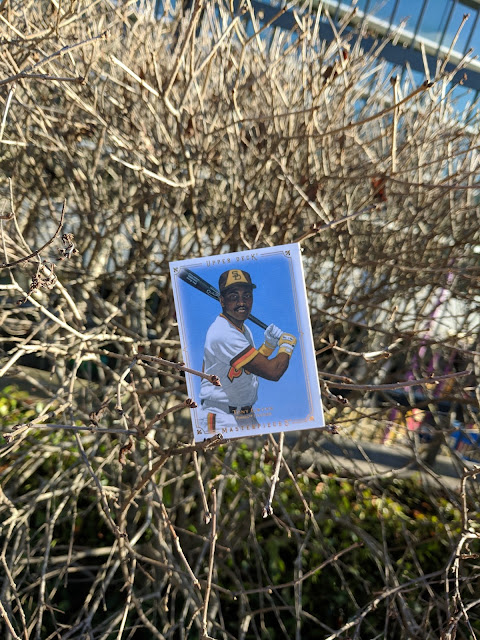 Oh hey, congrats to Dimebox Nick for winning my big contest yesterday! The Chargers beat the Raiders with a combined score of 40 points, which was Nick's assigned number. 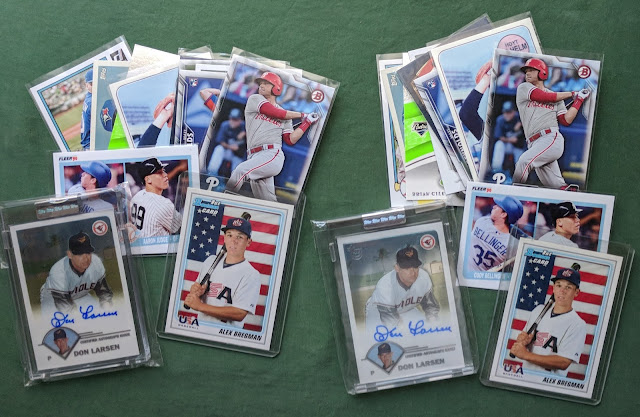 Yes, TWO identical prize packages! That means we've got a second-chance winner to find. Let's not drag this one out, but if you'd like to enter, comment below specifically stating you'd like to be in the running for the second-chance prize. (Must have entered the prior contest to be eligible.) And we'll random it off in a day or two. (UPDATE: entry period is now closed.)